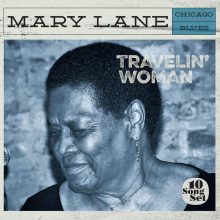 At 83 years of age, legendary blues singer Mary Lane is proving that she’s still got it. Two decades after the release of her first full-length CD, Lane has made a notable comeback with Travelin’ Woman, appropriately released on Women of the Blues Records.

Mary Lane is perhaps one of the last female blues singers of the Great Migration period. Born in Clarendon, Arkansas, she moved to Chicago in 1957 and soon became a staple of the city’s West Side blues circuit. The story of the singer’s life, as well as the making of Travelin’ Woman, can be seen in the documentary I Can Only Be Mary Lane by filmmaker Jesseca Ynez Simmons. Although Lane is well known in Chicago, the documentary aims to grant her the wider recognition that she deserves.

Mary Lane’s deeply moving lyrics and rich vocals on each of the album’s 10 tracks makes Travelin’ Woman a must-listen for any blues fan.