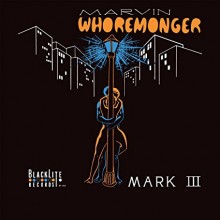 For the uninitiated, Now Again Records is an imprint that specializes in unearthing rare and obscure soul and funk recordings.  Each re-release is accompanied by detailed liner notes.  The notes really speak to one of the great things about Now Again—they do not just unearth the music, but also the stories behind them.  The story behind Mark III’s Marvin Whoremonger is simultaneously as interesting and disjointed as is the music on the album.

The story told in the 26 page illustrated booklet primarily follows the lives of Marvin Neroes, who serves as the vocalist on Marvin Whoremonger, and the producer of the album Charles Lober Abu “Cholly” Williams. Neroes led a rough life and came across Williams in Las Vegas while in his early twenties. Williams, who reportedly had a fondness for “left of center” projects, linked Neroes up with brothers Richard and Michael Thompson (guitar and drums respectively) and Clifford Johnson (bass), who were still in their teens. Williams’ vision for these musicians was to create a concept album; the result, while light on cohesiveness, presents a unique (if somewhat half baked) project.

Marvin Whoremonger is a surprisingly synth heavy (Williams brought in a keyboard player and horn section for some tracks) album that shows the youthful exuberance of the players and the almost stream of consciousness lyrics of Neroes. The bulk of the album feels like a soundtrack to film that never was, recalling some of the jammy, looseness of Earth, Wind & Fire on the soundtrack to Melvin Peebles’ Sweet Sweetback’s Baadasssss Song.  The best of these “concept” tracks for my money is “Pusher Man” and “Funky Heaven,” which both boast standout use of synth from the unnamed keyboardist along with great guitar and bass work.

Oddly enough, the album completely switches gears on the tracks “Going to the Top” and “The Party’s Over,” which Williams allowed the band to oversee. It is on these two tracks, however, that I personally really see the potential for what this band may have accomplished had they been given time to grow as a unit. These tracks are straightforward, uptight and funky, and stick out on the album like sore thumbs in the most positive way imaginable.

My hat goes off to Now Again for continuing to bring albums like Marvin Whoremonger to light, as well as highlighting the intriguing stories of the folks who made them. While this album may not be my favorite among Now Again’s releases, it was still interesting to listen to and learn the story behind its creation.