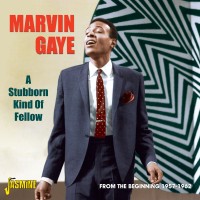 This new 28-track compilation from London’s Jasmine label collects some of the earliest recordings of Marvin Gaye, beginning with his forays into the Washington, D.C. doo-wop scene.  Gaye was singing with the Marquees in the 1950s when the group came to the attention of Bo Diddley, who along with local performer Billy Stewart, got them signed to the Okeh label. A Stubborn Kind of Fellow opens with the Marquees first singles:  as Stewart’s back-up singers on “Baby You’re My Only Love” and “Billy’s Heartache” (Okeh 7095), and their own disc featuring “Hey Little Schoolgirl” with “Wyatt Earp” on the flip side (Okeh 7096), all produced by Diddley and released in November, 1957.

The next five tracks pick up with Harvey & The Moonglows on the Chess label in 1959. Harvey Fuqua had just disbanded his original line-up and formed the “new” Moonglows using members of the Marquees plus Charles Barksdale from the Dells. Included are two Chuck Berry singles backed by the Moonglows, “Almost Grown” and “Back in the U.S.A.,” plus three Moonglows selections. On these songs Gaye is occasionally given a share of the spotlight, and in “Mama Loochie” he takes over the lead for the first time.

The bulk of the compilation is a reissue of Gaye’s first album, The Soulful Moods of Marvin Gaye, released by Motown in 1961 and produced by Berry Gordy. Despite the album’s title, Gaye elected to fill the album with standards such as “My Funny Valentine” and “Love For Sale.”  His “soulful moods” only surface on the Gordy penned “Let Your Conscience Be Your Guide,” and the Gordy-Fuqua song “Never Let You Go (Sha Lu Bop),” a Little Richard knock-off (though not as maniacal).

The final eight tracks of “Bonus Singles” are drawn primarily from Gaye’s second Motown album That Stubborn Kinda Fellow (1963), a mix of doo-wop, pop, and R&B.  The uptempo title track became Gaye’s first break out hit single, followed by “Hitch Hike,” which finally set him on the path to soul superstardom.  Overall, this is an enlightening compilation for those desiring an exploration of Marvin Gaye’s formative years, including his hits and misses.