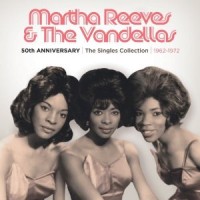 The question often gets posed: Motown or Stax?  Martha Reeves, the Alabama-born Motown ingénue, muddies the musical waters with a voice that brings a deep-throated Southern soul (often associated with Memphis’s Stax Records) to Berry Gordy’s Hitsville. With her booming alto voice, Martha lends the Vandellas a more emotive, bluesier sound than the typical Motown act and especially the Supremes, whose rising star eventually eclipsed that of Martha and co.

Upon the group’s 50th Anniversary, Motown’s box set release of Martha Reeves & the Vandellas: Singles Collection, 1962-1972, they finally get the anthology treatment their prolific 10-year recording run deserves. With a 57-page booklet written by pop music historians Keith Hughes and Bill Dahl, the box set tells the story of the girl group sound through the kohl-rimmed eyes of Motown’s original girl group. The colorful design and layout of the liner notes and the 3-CD, 82-song tracklist make this set a music collector’s prize pick.

Disc 1 covers the group’s career at the top of the charts from 1962-1967 with such Holland and Dozier hits as “Heatwave,” “Dancing in the Street,” “Quicksand,” and “Nowhere to Run.” During that time, Martha & the Vandellas tracked dozens of pop gems that sat on Motown’s backburner for years, sometimes longer—“Jimmy Mack” was shelved for nearly 2 years and nearly forgotten before it became a top-ten hit in 1967, a result of Motown’s spotty prioritization of the group.  The recordings from this period, before the girl group sound became routinized by the era’s songwriting powerhouses, runs the gamut:  from the breezy, tropical-sounding “Jealous Lover” to the biker-ballad “Wild One” and the jazz-serenade “Old Love (“Let’s Try it Again”). On these mono-mixes, Martha’s voice foregrounds the Funk Brothers’ deceptively complex instrumentation, drawing out the grittiness of Mike Terry’s bari sax as well as the delicate glassy tones of the piano arrangements. Disc 1’s biggest surprise is a Spanish-language version of the hook-heavy “Jimmy Mack,” a rarity that is the would-be envy of girl group record collectors the world over.

The group’s first 45 release “I’ll Have to Let Him Go” w/ “My Baby Won’t Come Back” has a thumping backbeat that is reminiscent of Redbird recording artists, the Dixie Cups from New Orleans; which is to say, it has a rawer, swinging sound. Martha’s subdued vocals give way to unexpected gospel wails, which, along with a stuttering tremolo guitar riff, give the otherwise poppy “I’ll Have to Let Him Go” a heart-heavy quality.

The liner notes demystify some of the instrumental magic behind the hits “Dancing in the Street” and “Nowhere to Run”; Martha’s brassy voice is complemented by a percussive beat that is the songs’ signatures: R&B composer Ivory Joe Hunter, in the employ of Motown, whipped rattling snow-chains over a plank of wood to create the song’s irresistible danciness:

Disc 2 begins with the single version of “Jimmy Mack,” the last of Martha & the Vandellas chart-topping hits. In the wake of its success, the group experimented with their sound in response to the changing political and aesthetic climate of the late ’60s. Teamed with the Alabama-born songwriter Sylvia Moy, Martha & the Vandellas recorded bubblegum soul as heard in “Love Bug Leave My Heart Alone” and “Honey Chile,” songs that couple Aretha Franklin’s earthiness with the Jackson 5’s party spirit. The group’s late-’60s work also captures some of the era’s psychedelic craze. The fuzz guitar on “Love Bug” and the trippy orchestral sound of “You Can Have Him” see the group venturing into paisley-printed experimental territory, as did their labelmates the Temptations on Psychedelic Shack. Disc 2 also features “I Should Be Proud,” an anti-war protest song, whose charged performance by Reeves (whose brother was a casualty of the Vietnam War), sees the girl group making an uncharacteristic move toward socio-political song material.

Disc 3 includes songs being released from the Motown vaults for the first time and has two standout tracks: the rock’n’roll stomper “Better Think It Over” and a whacky bubblegum version of the dance novelty number “C’mon and Swim.”

With subtle but nevertheless fierce displays of femininity, Martha Reeves & the Vandellas reveal girl group music to be more than a teenybopper soundtrack to the ’60s. This boxset captures Martha & the Vandellas coming of age and feeling all the ups and downs of love, of the music business, and of the changing times. And the Motor City mavens approach all with an unremittingly upbeat attitude and sound, as heard on “Motoring”: “We’re gonna motor all night long and when it starts to raining turn your wipers on.”