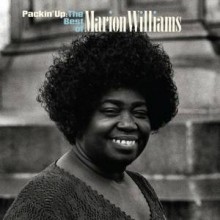 Distinguished gospel scholar and producer Anthony Heilbut has been responsible for many historical compilations, and this time around he’s managed to unearth 13 previously unreleased tracks recorded by Marion Williams (1927-1994)—one of the greatest gospel singers of all time. Packin’ Up: The Best of Marion Williams combines these unissued gems with 13 additional tracks. The selections were recorded over a 35-year period, beginning with Williams leading the Famous Ward Singers in definitive performances of “Sweet Low, Sweet Chariot” and “Packin’ Up” at the 1957 Newport Jazz Festival (previously unreleased versions), and concluding with a haunting 1993 recording of the socially conscious “I’m a Stranger,” about “homeless, hungry people out on the street.”

The album opens with another previously unreleased 1993 track, “Press on Like the Bible Said,” a gospel blues shouter featuring Herbert Pickard on organ, Eddie Brown on piano, and Jonathan Dubose on guitar. Other highlights include the gospel blues rendition of “Nobody Knows, Nobody Cares,” her signature version of “Didn’t It Rain,” and her hair-raising performance of “When Death Shall Determine My Stay Here” (backed by James Perry on organ), where “she was clearly struck to the depth of her sanctified soul” (Heilbut).

Those unfamiliar with Marion Williams will likely be astonished not only by her vocal prowess, four octave range, and powerful delivery—but also by the wide range of her sound, from traditional gospel to songs that incorporate blues, jazz, folk and rock ‘n’ roll. This compilation would be ideal for classroom use, illustrating the links between gospel and secular music genres, as well as Williams’ influence on artists ranging from Little Richard and James Brown to Nina Simone, Aretha Franklin, and the Beatles. Packin’ Up is accompanied by a booklet with extensive liner notes by Heilbut and illustrated with archival images from his personal collection.