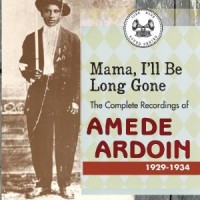 Tompkins Square recently launched its “Long Gone Sound” series with Mama, I’ll Be Long Gone: The Complete Recordings of Amede Ardoin, 1929-1934. This reissue project was obviously a labor of love for producer Christopher King, who also penned the liner notes and remastered directly from the original 78s, many from his own collection. The goal was to “represent, for the first time, every surviving recorded instance of Ardoin’s singing and playing.”

Amédé Ardoin, a rural black French-speaking Creole, became one of the most revered Cajun musicians in Louisiana. Rising to fame in the 1920s, he performed at dances and house parties for both black and white audiences throughout the bayou region and west into Texas.  His syncopated Afro-Creole accordion style and spirited vocals influenced everyone from first cousin Alphonse “Bois Sec” Ardoin to later musicians such as Conray Fontenot and Iry LeJeune (who re-interpreted and popularized many of Ardoin’s songs in the1950s).  Ardoin frequently partnered with Cajun fiddler Dennis McGee, and the pair made some of the earliest recordings of Cajun and Creole songs, ranging from one-steps, two-steps, waltzes, blues narratives, and love songs.

Mama, I’ll Be Long Gone is highly recommended. Anyone interested in Cajun music, the roots of Zydeco, or early fiddle and accordion styles will greatly appreciate this compilation.