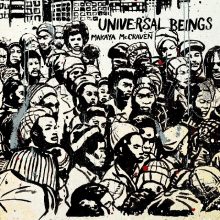 Jazz drummer Makaya McCraven could not possibly have predicted that the release date of his new album, Universal Beings, would coincide with a week of domestic terrorist acts fueled by racism, anti-semitism, and anti-immigration hysteria. Though his album’s “all-encompassing message of unity, peace & power” would be welcome at any time, it is particularly transformative at this moment as a reminder of our shared humanity and the need to bridge cultural divides.

The double CD is divided into four distinct sections, organized around recording sessions in New York, Chicago, London and Los Angeles. Makaya, who was born in Paris, France to expat American jazz drummer Stephen McCraven and Hungarian singer Agnes Zsigmondi, sought other globally-minded musicians for these four ensembles. Together they draw from diasporic jazz traditions while also tapping into a wellspring of contemporary influences. McCraven once again takes on the role of “beat scientist,” sampling and rearranging the live mix in post-production to create a collage of sounds—a technique perfected in his 2015 breakthrough album In the Moment.

Opening with the six tracks recorded in New York, McCraven anchors an ensemble featuring a couple of local mainstays as well as musicians from his current hometown of Chicago. Jazz harpist Brandee Younger is featured on “Holy Lands,” her free form glissandos embellishing an ostinato pattern with a Middle Eastern vibe. Bassist Dezron Douglas, aka “Black Lion,” has a self-titled track, while cellist Tomeka Reid is featured on the otherworldly “Tall Tales” and vibraphonist Joel Ross on the time-shifting “Young Genius.” Back in Chicago, Reid and McCraven are joined by Junius Paul on bass and Shabaka Hutchings on tenor sax, who takes a solo turn on “Wise Man, Wiser Woman.”

McCraven’s recombinant DNA is most apparent on tracks such as the free form “Prosperity’s Fear” featuring Junius Paul and “Flipped Out” from the London sessions. Other highlights include Jeff Parker’s fuzzed out guitar on “Turtle Tricks,” recorded at his home studio in Altadena, CA. Parker and McCraven are joined by violinist Miguel Atwood-Ferguson, alto saxophonist Josh Johnson, bassist Anna Butterss, and percussionist Carlos Niño on the title track, which closes the album with a laid back, minimalist vibe while still offering enough improvisation to keep things interesting.

Universal Beings offers an exploration of Makaya McCraven’s aural universe, a mind altering combination of free jazz fused with other elements of contemporary black music, transformed by the beat scientist’s mash-up in the mix.