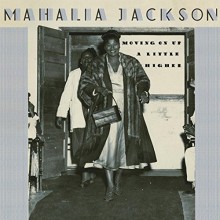 Title: Moving On Up a Little Higher

Billed as the “ultimate collection,” this new compilation from Shanachie is indeed a must have for all gospel music enthusiasts. Featuring 22 previously unleased songs recorded between 1946-1957, Moving On Up a Little Higher was produced by well-known gospel historian Anthony Heilbut, who was also responsible for last year’s Marion Williams compilation, Packin’ Up.

A tireless researcher, Heilbut scoured archives across the country to locate the gems included on this disc. Nine of the selections were recorded in 1957 during Mahalia’s first appearance at Newport Jazz Festival, where she was accompanied by both Mildred Falls on piano and Dickie Mitchell on organ.[1] Heilbut notes that Mahalia followed her chief rival, Marion Williams (Clara Ward Singers), who also performed at the festival, perhaps inspiring Mahalia to greater heights. Whether or not there’s any truth to this assumption, the inclusion of other gospel singers at the festival likely helped Mahalia channel the Holy Spirit in this very secular setting. Though she had already recorded some of these songs, her renditions at Newport are often much more intense than her studio recordings for Apollo, and later Columbia.

The disc opens with Mahalia explaining to the Newport audience, “You know, I’m really a church singer – I may have this rock ‘n’ roll, but I’ve got to feel this thing – I got to get it to be a part of me, you know? Hallelujah!” Then she tears into “Keep Your Hand on the Plow,” rocking and shouting to the heavens. This is followed by a swinging version of “Jesus Met the Woman at the Well” and the Mahalia standard “Troubles of the World,” a slow burner starting on a low moan that sends chills up the spine. Next is Roberta Martin’s arrangement of “Didn’t It Rain,” which Jackson “builds to a shouting explosion.” This leads into Thomas A. Dorsey’s “I’m Gonna Live the Life I Sing About In My Song,” and the obvious crowd favorite, “In the Upper Room,” which Jackson recorded for Apollo in 1952. Here she only includes the chorus, but still manages to brings down the house.

The Newport set closes with several more crowd favorites: a shouting rendition of “When the Saints Go Marching In,” the Rev. W. Herbert Brewster’s “Move On Up a Little Higher,” and “His Eye Is On the Sparrow” which includes some impromptu testifying.

The next batch of recordings were sourced from The William Russell Jazz Collection housed at The Historic New Orleans Collection. This fabulous treasure trove of rare material includes two tracks recorded in 1951 during a folk music concert at Chicago’s Wendell Phillips High School. Mahalia sang six songs at this concert, but only two are included here: Alex Bradford’s “Savior More Than Life To Me” (never commercially recorded by Jackson), and “I’m Glad Salvation Is Free.” The latter was one of her biggest hits, and on this performance she ad libs verses not included on her 1950 Apollo recording.

Four months later, Jackson was the featured guest at a symposium held in 1951 at the Music Inn in Lennox, MA. Two more tracks come from this performance: “He’s Pleading in Glory For Me” composed by her good friend Robert Anderson, and “Have a Little Talk With Jesus”—a gospel standard by the noted Baptist preacher/composer Cleavant Derricks, Sr.

Now, for the crème de la crème. In 1955, William Russell also recorded rehearsals in Mahalia’s Chicago home, and I understand these have only recently been digitized and made available to scholars. A haunting, a cappella performance of “Dark Was the Night and Cold the Ground”—the same song first recorded by Blind Willie Johnson in 1927—is included on track 2 (the disc is not sequenced chronologically).  Jackson similarly lines out “Before This Time Another Year” and “When The Roll Will Be Called In Heaven,” as well as “Father I Stretch My Hand to Thee,” which is preceded by her memories of Mount Moriah Baptist Church in her hometown of New Orleans. Even more enticing, there’s Mahalia accompanied by the great Thomas A. Dorsey on “Peace! It’s Wonderful” which segues rather abruptly into “Coming Back Home to Live With Jesus.” Though brief, this remarkable track captures a rare pairing of the “Father” and the “Queen” of gospel music.

The last gem from the William Russell Collection dates from a 1956 CBS Sunday morning television broadcast, featuring Mahalia on “There’s Been a Great Change In Me,” described as an old shout song rearranged by Doris Akers with Jackson singing in a higher range than usual.

The final tracks of the disc are also extremely significant, since they document Mahalia performing gospel music in sacred settings. “Beams of Heaven” was restored from a one-of-a-kind lacquer disc aircheck of a 1946 Bronx, New York church radio broadcast. Even better, the compilation closes with Jackson singing Rev. W. Herbert Brewster’s “Getting Happy In Chicago,” sourced from a 1948 aircheck of a live broadcast from Chicago’s Greater Harvest Missionary Baptist Church. In 1945 the church’s founder, Rev. Louis Boddie, began to broadcast Sunday services over radio station WAAF, which aired coast to coast. Thankfully, a number of these broadcasts from 1948 were recorded on wire reels by Melville Herskovits and later deposited and preserved at the Indiana University Archives of Traditional Music.

Heilbut, who also wrote the liner notes, begins his essay with 8 compelling reasons why Moving On Up a Little Higher should be considered the definitive Mahalia compilation. Needless to say, we can find 22 reasons why any gospel enthusiast will want this CD, since each track is a treasure.

[1] Jackson’s appearance at Newport the following year was released by Columbia as “Mahalia Jackson Live at Newport 1958.”