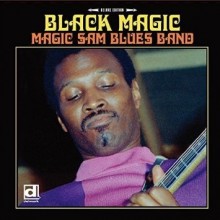 The Magic Sam Blues Band performed quintessential Chicago blues, from the classic rhythm section led by Odie Payne, Jr. to the tenor saxophone played by Eddie Shaw. Now their 1969 album, Black Magic, has been remastered from the original analog tapes and reissued by Delmark as a deluxe edition, including two previously unissued tracks and 16 pages of liner notes, beautifully illustrated with never-before-seen photos from the 1968 recording sessions.

Black Magic includes irresistible blues jams such as “I Just Want A Little Bit” and “Keep On Loving Me, Baby,” as well as more funk-inspired ballads like “You Better Stop.” No matter the style, every song is full of the soul and top notch musicianship of the 1960s Chicago west side blues scene. This was the last studio album recorded by Magic Sam, released just days after his premature death at the age of 32, Black Magic’s endurance stands as a testament to his legacy in the world of blues music.