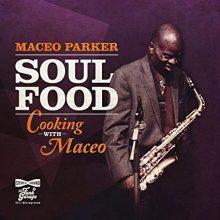 Saxophone legend Maceo Parker returns with his first album in eight years, Soul Food: Cooking with Maceo. Parker is best known for his work with the James Brown band and later with Parliament/Funkadelic. Although his solo recordings date back to the 1960s and 1970s, his current solo career really begins with the release of the Roots Revisited album in 1990.

For his new release, Parker traveled to New Orleans to record at the 1000HZ Studio with engineer Andrew “Goat” Gilchrist. Seven out of the nine tracks are cover versions along with his re-recordings of “Cross the Track” and “M.A.C.E.O.,” from two of his early solo recordings. In keeping with the New Orleans theme, Maceo applies his instantly identifiable sax sound to such classics as “Just Kissed My Baby,” originally by the Meters, “Yes We Can Can,” by the Pointer Sisters (produced by the legendary Allen Toussaint), and “Right Place, Wrong Time,” by the late great Dr. John.

Also included are “Hard Times,” originally by David “Fathead” Newman, “Rock Steady” by Aretha Franklin, the jazz classic “Compared to What” by Les McCann, and, somewhat unexpectedly, “The Other Side of the Pillow,” from Prince. While not generally known as a vocalist, Maceo acquits himself quite nicely as a singer on several tracks.

All in all, this is a very enjoyable release from funk/sax legend Maceo Parker. He’s 77 now. If we ever get to see live music again and he comes around, I’d suggest you don’t pass it up.