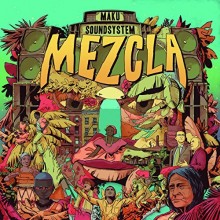 Immigration has been a theme in music for centuries, as people who relocate try to remain connected to their roots, and attempt to relate past experiences to the present. However, themes of immigration seem to be especially poignant in the political climate of 2016, as boundaries and immigration policies are pushed and pulled throughout the world. Many musicians are speaking out about their personal immigration experiences in this year of contention, in particular addressing humanitarian issues. That’s what M.A.K.U. Soundsystem does on their fourth album, Mezcla. The eight-piece Colombian to New York City band combines traditional Colombian beats, grooves from West Africa, and Moog synthesizers from the ‘90s club scene to bring all of their experiences—both musical and personal—into a comprehensive album.

The opening track, “Agua,” addresses income inequality through the melismatic voice of lead singer Liliana Conde. Two minutes into the almost six minute song, she switches to spoken word poetry: “With so many walls going up around the world trying to separate us, trying to divide us, we want to come together and sing in unison of the things that bring us together and unify us.” A full chorus then joins in, singing about how the oceans cannot be separated and water flows through all of our veins, regardless of race or country. It is a powerful and upbeat song, featuring a fast beat maintained through a variety of percussive instruments and ornamented by the horns.

Another standout track is “Let It Go,” a rhythm-driven song that focuses on instrumentals over vocals. Starting with a heavy West African beat, the song blends Afro-Caribbean roots with improvising horns that edge into a jazz feel. Three minutes into the song, voices enter in unison saying, “Let it go and let the music take you.” These words repeat for the rest of the song, building with the music as it becomes faster and new instruments join in to create a satisfying climax.

A slow waltz, “De Barrio,” takes the listener on a journey of an immigrant from Latin America to the United States. It is sorrowful yet warm, and reflects the complications of the bittersweet trip. According to bassist and singer Juan Ospina, this tone is meant to reflect how immigrants put their lives at risk, and emphasizes that borders are created by men: “Look down from space and you won’t see them.” Harmonious notes held out near the end of the song echo unbridled cries of emotion, though whether they are cries of sorrow or hope is left to each listener’s interpretation.

In “La Inevitabile,” M.A.K.U.’s hope for the future is clear, as they sing in Spanish, “when in mixing and coming together they represent the rhythm of our beating hearts.” This message of mezcla, or “mixing,” is central to the album. Mixing of music old and new, mixing of people from different cities and backgrounds, all come together on Mezcla as this group of Colombian artists create music that combines their past experiences with their present lives in New York.