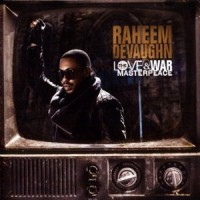 For the last five years, neo-soulful D.C. native Raheem DeVaughn’s R&B gems have run under the radar. His 2005 debut, The Love Experience, included the Earth, Wind & Fire-sampled “Guess Who Loves You More,” but was regulated to BET’s then-popular R&B program Midnight Love. Next up was his Grammy-nominated Love Behind the Melody, which spawned “Woman,” an honest tribute to the opposite sex, and the popular hit “Customer.” For his third installment, DeVaughn has retreated to a sound that is unique and familiar at the same time.

The Love&War MasterPeace is a work constructed with respect to the socially-conscious love epics from the likes of Stevie Wonder, Marvin Gaye and Curtis Mayfield. If you don’t believe me, just listen to the intro and interludes by Dr. Cornel West, who serves as a guide through the mind of an artist who remembers when music was a pilot for action, instead of just a sponge for reactions.

DeVaughn begins his 16-track opus with a bold social stance on the single “Bulletproof.”  In true Curtis style, DeVaughn adds his perspective on society’s corrupt status in a strong falsetto.  Ludacris aids him on this hauntingly good track which foreshadows a world where the individual is more important than the masses. The strength of his social awareness is taken to higher ground with two other beautiful collaborations. The majestic “Nobody Wins A War” features fellow neo-soulmates  Jill Scott, Bilal and Anthony Hamilton in deconstructing the politics of war to the raw truth: people die. The second is the powerful “Revelations 2010” with Damian Marley. Set on top of Isaac Hayes’s “The Look of Love,” DeVaughn ends the album where he began.

–
DeVaughn balances the message-heavy tracks with equally pleasant ballads and mid-tempo treats. His second single, “I Don’t Care,” is a jubilant ode to a love no one understands but him and his woman. Right after that is the heartfelt “Black & Blue” that defines love as never laying a hand on your mate. DeVaughn tackles the slow jams with as much bravado as the ballads. The somewhat obnoxious “B.O.B” declares how he can provide a better experience than the average “battery operated boyfriend,” and the slithering “Microphone” resembles “Customer” with its metaphors.  But for romance, DeVaughn channels old school grandeur in the six-minute-plus “Garden of Love,” a definite grown and sexy offering.

DeVaughn’s material is a good fit for generations both past and present as love, and unfortunately hate, are two entities that never seem to cease. Hopefully, the former holds true to the popular saying, and will righteously conquer all.

is an extended version of the album featuring 11 additional songs.