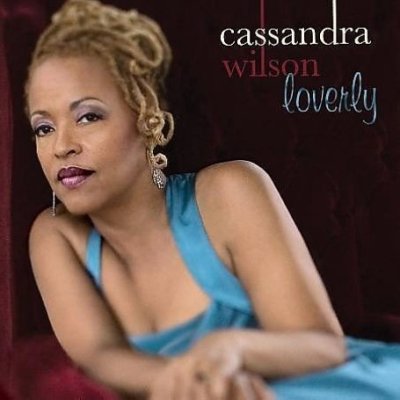 Of the various ingredients that go into making a music recording masterpiece, the following items are likely to be placed at the top of the list: the selection of highly skilled yet creative musicians who excel in the selected musical genre; musicians who complement one another within the musical recording unit; and a recording environment conducive to optimal performance. All of these features are realized in Cassandra Wilson’s self-produced recording, Loverly. The performance represents a return to Wilson’s jazz and blues roots, following her more pop influenced recent releases, such as Glamoured (2003) and Thunderbird (2006). In Loverly, as in Wilson’s earlier jazz recordings, the singer is both the centerpiece and a collaborative ensemble player. Her presence is palpable but not overbearing, leaving room for, and even welcoming, creative interplay between the various members of the ensemble.

Wilson’s voice and musicianship are in superb shape. Singing in tune and at ease, she transforms the repertoire into her own artistic statements, occasionally laughing, moaning, snapping her fingers, or cueing the band with verbal comments from the background. At a few points during the recording, she comfortably wanders to a corner of the room where she briefly sings, accessing the acoustics of space and environment available to her. The recording environment itself is key, taking place in a rented house in Wilson’s hometown of Jackson, Mississippi, away from the more stressful surroundings of New York where most (if not all) of the musicians reside.

The ensemble is comprised of mutually familiar musicians who have played with one another in various groups and situations, in some cases, reaching back over a decade. Mostly grounded in the jazz idiom, they each bring unique strengths. In particular, pianist Jason Moran, a brilliant virtuosic improviser, inspires rather than overpowers on jazz standards such as “Lover Come Back to Me” and “Caravan,” as well as the jazz reinterpretation of the popular film tune, “Gone with the Wind.” Guitarist Martin Sewell dominates on the two blues tunes with a funky rendition of “St. James Infirmary” and a slide guitar basis for “Dust My Broom.” A driving rhythmic undercurrent between drummer Herlin Riley and Nigerian percussionist Lekan Babalola is laid out on the recording. The ensemble is completed with Lonnie Plaxico on bass, and there are guest appearances from bassist Reggie Veil and trumpeter Nicholas Payton.

In all, Loverly is one of Wilson’s best recordings to date and a welcome return to her roots. Loverly indeed!