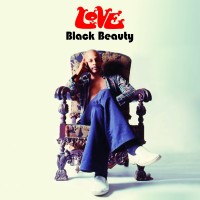 Love was a groundbreaking integrated rock band formed by Arthur Lee in Los Angeles in 1965. The band’s self-titled debut album was released in 1966, a full year before Jimi Hendrix and Sly & the Family Stone burst onto the scene with their own albums, together carving out a space for black rock musicians in the midst of the British invasion. From this fertile delta of guitar driven rock and hippiedom, Love went on to release several more albums, including Forever Changes in 1967, regarded as a masterpiece of early psychedelic rock.

Black Beauty has been designated “the missing chapter in the book of Love,” recorded in 1973 for the obscure Buffalo label which went bankrupt before the album was released. Though the master tapes were never found, the album was recently reconstructed through acetate test pressings. These sessions featured a new lineup (the original group had disbanded), with Lee selecting “cats who can play funky and rock.” Fitting the bill were bassist Robert Rozelle and guitarist Melvan Whittington (both former members of Little Richard’s band), and drummer Joe Blocker who started touring at age 15 with Johnny “Guitar” Watson. Their backgrounds meshed perfectly with that of Memphis-born Arthur Lee, and thus Love morphed into an all-black band that played funk-inflected rock with Black Power era themes.

Not surprisingly, the album’s opening track “Young & Able (Good & Evil)” incorporates one of the band’s favorite Malcolm X quotes about prosperity: “Just because we’re at the table does not mean we’re diners.” In Lee’s lyrics, the phrase becomes “I’m young and able / don’t want to set the table,” sung over crashing guitar chords. “Midnight Sun,” a song scavenged from an aborted 1971 session for Columbia, is the track most obviously reminiscent of Hendrix and psychedelic-era Love. On the achingly beautiful, self-reflective “Can’t Find It,” Lee’s emotional struggles come to the fore as he sings “everytime I cry my heart out / everytime I play the fool / there’s got to be something in this lonely world for me / but I can’t find it / I can’t find it.”

One of the most interesting tracks is “Walk Right In,” a cover of a song first recorded by Gus Cannon in 1929 over which Lee juxtaposes lyrics from an earlier Love song, “Always See Your Face.” The only other song on the album not penned by Lee is “Skid,” contributed by road manager Riley Racer with lyrics by poet Angela Rackley. Again, the style harkens back to the late ‘60s, with plenty of reverb and Whittington’s guitar punctuating the chorus with an “agitated” chord structure. Certainly the most incongruous track is “Beep Beep,” a lilting Caribbean influenced song falling somewhere between calypso and reggae, with Carl McKnight on steel drums and Lee doubling the guitar part on harpsichord. Another throwback is “Stay Away,” written by Lee in 1965 and notable for its “wah-wah bursts of lead guitar.” Closing the album is “Product of the Times,” pulled from a 1970 live recording with different band members and possibly added as a last minute filler.

But there’s plenty more! This deluxe edition offers many notable bonus tracks, beginning with Lee’s folksy title song from the film Thomasine & Bushrod, written by and starring Max Julien (the rest of the film was scored by Coleridge-Taylor Perkinson). Next up are excerpts from a 1974 interview with Steven Rosen, recorded one year after the Black Beauty sessions.  Lee talks about his early influences and bands, as well as his work with Jimi Hendrix, including a “lost album” they recorded together in London, and Hendrix’s appearance on the 1964 Arthur Lee penned/produced single “My Diary.”  Also included are three songs recorded live at the Electric Gardens in Glasgow, Scotland in 1974 with the Black Beauty lineup plus John Sterling on guitar. Though not the best audio quality, the tracks were added in order to capture the energy of Love’s live show during this period. The final bonus track, “L.A. Blues,” was recorded in 1996, with a re-integrated backing band known as Ventilator.

And so this chapter in Arthur Lee’s history comes to an end. According to Joe Blocker, after Hendrix’s death, “from a commercial point of view, there were never any more successful black rock bands.” Lee had “slipped in before the door was shut,” but ultimately wasn’t able to sustain the brief fame that came with Forever Changes. In a 2003 interview prior to Lee’s death (he succumbed to leukemia in 2006), he stated: “The only thing that really bothers me is that I have yet to be recognized by my own people. What Martin Luther King was talking about, what he said he might not live to see happen? I was already living it, man. But because I chose to play rock ‘n’ roll, I’m invisible to black people.”  With the release of Black Beauty, the growing popularity and recognition of other recordings by Love and Arthur Lee, and the rise of the Afro-Punk movement, perhaps he will finally get his wish.