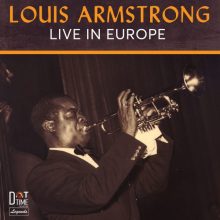 Louis Armstrong created magic throughout his career. One of many remarkable phases occurred when he began touring and recording with the All Stars, featuring Jack Teagarden and Earl Hines, in 1947.  The recordings on Live in Europe include performances from two European tours made by Louis Armstrong in 1948 and 1952, a period where he was associated with Decca Records. By 1952, Teagarden and Hines were no longer performing with this group, so the personnel changed.

The two 1948 concert performances (tracks 1-9) were recorded February 23-24 in Nice, France. In the LP era, Decca released a recording titled Satchmo at Symphony Hall, a live performance from a concert in Boston featuring Louis Armstrong and His All Stars. There are no other released recordings from Louis following that concert until a radio transmission broadcast made while he was flying to France on February 19, 1948, and again upon his arrival at Orly airport in Paris the following day. Louis was welcomed with great enthusiasm in France for his first European engagements since living there for a time from late 1933 through early 1935. Recordings capture some of his performances while there, made in 1933 and 1934. For Louis, the excitement from the crowds at the first Nice Jazz Festival was, no doubt, wonderfully encouraging, since some in the US had come to regard him as being behind the times stylistically, superficially dismissing his performances as “old time Dixieland.”  Increasingly, bebop artists were capturing the attention of many jazz fans.

Contrary to the album notes, all but two of performances on Live in Europe have been previously commercially issued, but circulation of those recordings was mostly in very limited editions targeted for collectors. One tune from the concert on February 22 appears here for the first time: “Royal Garden Blues.” Another from the Berlin concert is “Lover Come Back to Me.” For collectors who love Louis’s recordings with Jack Teagarden and Earl Hines, the first of these tracks may be a sufficient reason to purchase this compilation, with “Lover” adding a special bonus to motivate that purchase. For everyone else, the power of this entire collection of performances should be a strong motivation to purchase a copy. For those who have never listened carefully to this classic version of the Louis Armstrong All Stars, this can be a powerful introduction since the audience’s enthusiastic spirit propels these great musicians to perform at their highest artistic levels.

Live in Europe also includes a performance recorded in Berlin in 1952 (tracks 10-16), also previously issued, featuring a later version of the All Stars without Teagarden and Hines. The concert still captures the audience’s appreciation for Louis Armstrong’s artistry, and Louis responds majestically to their encouragement. But I miss the added sparks created by his work with Teagarden and Hines.

The sound quality on these performances from Berlin is superb for recordings of this sort. The audio quality of the earlier recordings from Nice is still very acceptable, but perhaps presented with added boost to treble frequencies that seem a bit shrill to some ears. This boost does serve to accentuate Armstrong’s majesty.

Perhaps a few specific comments are in order about specific tunes:

Collectively, these recordings provide an important historical document. To Louis Armstrong, the performances affirmed his role as an internationally celebrated American artist. To the audience, his 1948 visit represented an additional step in return to normalcy in the years following WWII and a powerful reconnection with American culture and values. The performers and audience were truly united in a spirit of joyful celebration. This Dot Time release makes this wonderful music more accessible to those who have not sought the earlier issues on more specialized releases.

In closing, one of my personal memories is when Louis Armstrong recorded the text of a short promotional announcement I had written to provide publicity for the weekly jazz radio program I hosted for four years during my undergraduate engineering studies at Purdue University. He was a remarkable artist and a remarkable human being, willing to take time between performances to meet with me and give me this very special memory.

In passing, the jacket for the CD lists the twelfth tune as “Croquette” whereas it is actually “Coquette.”  This minor typo is corrected in the album notes inside the jacket. Following is a complete list of tracks on Live in Europe with personnel: