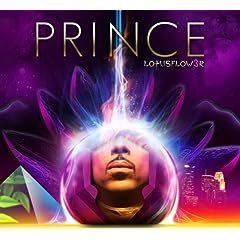 Prince Rogers Nelson is a multitalented musician who plays a variety of instruments and has written hundreds, if not thousands of songs. He has won seven Grammy Awards, a Golden Globe, an Academy Award, and was inducted into the Rock and Roll Hall of Fame in 2004, the first year he was eligible. Rolling Stone ranked Prince #28 on its list of the 100 Greatest Artists of All Time. He has had a very long and illustrious career and therefore is no stranger to danger. Therefore, with his bona fides well-established, the focus of this review will be his latest release, LotusFlow3R.

Like all Prince Fans, I was very excited to hear that Prince had a new 3-disc CD coming out. I thought, it’s about time for some new dew from his Purple Majesty. Sadly, the songs and music on LotusFlow3R are very disappointing and not what I expected at all. I started with great anticipation but I was left confused and wondering with great frustration. First of all let me say I am a big Prince fan, have been for years. With that bias admitted, let me review the new album as objectively as I can. LotusFlow3R is a three disc set, with two discs dedicated to Prince and one disc called “Elixir” by a Rihanna-type artist named Bria Valentine. This review will not discuss the latter.

Prince has always played many different styles and genres of music, from rock to funk and blues to R&B, which demonstrates his musical genius. Of the two discs by Prince, “LotusFlow3R” has twelve tracks all played in the “rock” genre. When I say rock genre I mean soft rock, hard rock, punk rock, head banging rock and of course rock and roll. Prince is rocking the block on this CD; however, it doesn’t sound like a block party. In fact, it sounds like some neighborhood kids rocking out in their dad’s garage. That’s right folks, this sounds just like kid-rock and I don’t mean the artist.

The first track, “From the Lotus,” sounds like Prince is waking up out of a deep sleep after listening to some inspirational relaxing music before getting ready to play. And though it is an instrumental piece, with lead electric guitar played throughout, it has no punch, no kick; it’s just noise and not a joyous noise either. The second track, “Boom,” musically pays homage to the master, Jimi Hendrix, but is lyrically naïve. The third track is a cover song. Prince has done covers of other artist songs before, such as 1995’s “Emancipation,” but honestly there is very little to cover in this remake of “Crimson and Clover” by Tommy James and Shondells except for the repetitive line “Wild thing / I think you move me / but I want to know for sure / You move me” that he took from the Troggs’ hit song. It doesn’t take much genius to sample a great hook and then exploit it on a cover.

Prince always felt that he was a slave to Warner Bros. and sought his emancipation “from the chains that bind me” in a 1993 legal battle (he often appeared in public with the word “slave” written on his cheek). This somewhat explains track five, “Colonized Mind,” a social commentary on the revolution against the master race who, according to the lyrics, are “genetically disposed to rule the world / down low a future full of isolated boys and girls.” Such is the flavor of the LotusFlow3R disc.

The second disc is called “MPLSsound” and if that’s true then it must be the “early” MPLSsound. As opposed to the rock oriented Lotus disc, this is a return to Prince’s hip hop and funk flavor that we all used to savor. However, I am sorry to disappoint you because there is not one “jam” on this collection. What is a jam? “Ole’ skool” definition of jam is grooves that can make you move, a beat that makes you tap your feet, a sound that is down that will make you snap your finger if you can’t clap your hands. I am sorry to report there is not one jam in the entire collection. Great Prince jams of the past include “1999,” “Head,” “When Doves Cry,” “Sign O the Times,” etc. There is not one track that moves me or grooves me, sorry.

MPLSsound begins with “(There Will Never B) Another Like Me,” which is pure hip hop flavor with the same bragging rights as all the other rappers. Then there is the track “Chocolate Box,” with Prince singing as this sweet thing. “Dance 4 Me” is reminiscent of the group Cameo, while the track “Ol’ Skool Company” sounds just like George Clinton’s Parliament/Funkadeli version of “Star Child and the Mothership Connection.” I know Prince is a musical genius, but what is the genius of sounding like someone else, and where are the jams?

I am sorry, Prince fans, but this LotusFlow3R is not the real deal. It sounds like a very young, immature Prince searching for his sound and looking for his identity. This can’t be the latest mix of music composed by an artist over 50. Prince released Crystal Ball in 1998 (a 5-CD collection of unreleased material) and in 1999 released The Vault Old Friends 4 Sale. This material also sounds as if came from the vault, perhaps more of the previously unreleased material that Prince has had stashed away for years. It sounds like retro vibes rather than something from NPD the “New Power Generation.” It does not sound as if this is the latest and the greatest body of work from the creative mind of a fifty year old music genius. Wake up Prince, we want the funk!