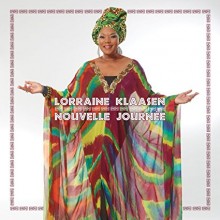 South Africa native Lorraine Klaasen learned how to perform on the world’s stages by tagging along with her mother Thandie Klaasen, a highly respected jazz singer. This allowed Klaasen to launch her career at an early age, and after successfully touring Europe, she decided to settle in Montreal. Since then, she’s been involved in musical theatre, won a JUNO award, and released three albums. On her latest project, Nouvelle Journée, she pays homage to her homeland by singing in the many languages of South Africa—specifically Tsonga, Sotho, isiZulu, Xhosa, English, and French—and by creating her own form of Township music.

Most of Nouvelle Journée focuses on having a “Township music feel,” reflecting the music created by the Bantu people in South Africa, particularly during segregation and the Apartheid. Klaasen’s decision to focus on this genre and South African languages came after reconnecting with her family and particularly her mother, in South Africa. The title track, “Nouvelle Journée,” is about this new experience and phase in Klaasen’s life, as she sings about having a new, fresh start and letting go of past mistakes:

The album was co-produced by Ntaka and recorded with musicians from all over the world, including the Democratic Republic of Congo and Haiti. Though the main style is Township music, these various musical influences and textures weave together throughout the album, from the funk of “Make It Right” to the jazz ballad “Where To Now.”

The exceptionally heartfelt “Polokwane” is a piano driven song with lyrics describing how one’s birthplace is a “sacred place,” a place that can never be forgotten or replaced. Klaasen pours out her soul, and it is evident that her homeland will always occupy an important and irreplaceable place in her heart and in her music. Nouvelle Journée is a physical manifestation of that, as Klaasen celebrates and honors South Africa and the many experiences and perspectives it brings to her music.