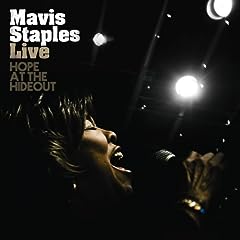 Title: Live: Hope At The Hideout

Mavis Staples got her start as one of the lead singers of the celebrated gospel/soul group The Staple Singers, originally founded and headed by her father, Roebuck “Pops” Staples.  After a string of singles and albums for Vee-Jay and Riverside in the late ’50s and early ’60s, the Staples, like many gospel artists of the time, found a secular outlet for their music in the burgeoning Southern soul sound.  They reached the height of their popularity after a move to the Memphis-based Stax label in 1968, becoming one of the primary musical voices of the American Civil Rights Movement with their positive and inspirational message songs.  At Stax, they worked with the likes of Booker T. & the MG’s and producer/songwriter Al Bell, the latter providing the Staples with their first number one single, “I’ll Take You There,” in 1972, considered by Rolling Stone magazine to be one of the top 500 songs of all time.

Mavis herself recorded as a leader for the first time in 1969.  She released solo albums sporadically until the early 1990s, including two for Prince’s Paisley Park/NPG label.  An almost decade-long hiatus followed — like many of the great soul singers of the 1960s, it took a while for Staples to be “rediscovered” — but since 2004 she has released three recordings in quick succession: Have A Little Faith (Alligator) from that year; 2007’s We’ll Never Turn Back (Anti-), a Ry Cooder production featuring an updated take on songs drawn mostly from the Civil Rights era; and 2008’s Live: Hope At The Hideout (also on Anti-), a rousing performance with her touring band recorded at a Monday night club show in Chicago.

One of the joys of Live: Hope At The Hideout is hearing Staples preach and growl in a bare bones setting, fronting a compact three-piece band augmented by a trio of backing singers.  At 70-years old, her voice is naturally rougher around the edges than it was during her Stax heyday (almost channeling Howlin’ Wolf near the end of  “On My Way”), but Staples’ brand of music is one that rewards honesty and emotional depth above surface beauty and impeccable technique.

Most of the songs recorded here are either traditional gospel numbers or recent arrangements from We’ll Never Turn Back.  After warming up the crowd with a brief version of Stephen Stills’ classic “For What It’s Worth,” Mavis and company dig into “Eyes On the Prize,” one of the songs from her 2007 CD.  While it’s impossible for anyone else to replicate the menacing grooves Cooder and drummer Jim Keltner cook up on the studio versions, Staples’ crew more than holds its own, stripping things down to their essentials while retaining the sweaty, funky atmosphere of Cooder’s studio arrangements.  Guitarist Rick Holmstrom displays a reverb-soaked, swamp-rock sound, and throughout the disc he accompanies Mavis with sensitivity and restraint, especially on the hushed duo performance of “Waiting For My Child.”  The rhythm section of Jeff Turmes on bass and Stephen Hodges on drums keeps the groove simmering, while backup singers Donny Gerrard, Chavonne Morris, and sister Yvonne Staples take star turns on Pops Staples’ 1965 lament, “Why Am I Treated So Bad,” and on the gospel chestnut “Wade In The Water.”

Following is a rendition of “Eyes On the Prize” from Staple’s website, accompanied by a video montage of Civil Right’s era imagery:

Not everything on the disc works perfectly.  “Down In Mississippi” pales in comparison to Pops’ despairing 1992 recording (from Peace To the Neighborhood, also with Cooder and Keltner), Mavis’ faster tempo striking a somewhat more defiant tone than the earlier version.  And the encore performance of “I’ll Take You There” is performed here as a one-off with just voice and Holmstrom’s guitar, losing the punchy horns and hip, quasi-reggae groove of the original from Be Altitude: Respect Yourself.  But these are minor quibbles, and probably unfair ones at that.  It’s impossible for an artist to top herself (or her father!) all the time, and Mavis Staples at 70 offers pleasures that, while distinct from those of her youth, are still eminently worth savoring.