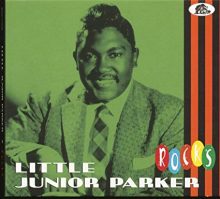 Little Junior Parker (1932-1971) is the most recent artist to be featured on Bear Family’s long-running Rocks! series, which focuses on “the best upbeat recordings of seminal roots music artists.” Though Parker’s life “was tragically truncated by a brain tumor,” the blues harpist “had enough time to leave behind a bountiful blues recording legacy that stretched across two decades.” As explained by Bill Dahl, reissue producer and author of the extensive liner notes, Parker released a string of R&B and blues hits for two of the seminal independent labels of the postwar era: Sam Phillips’ Sun Records in Memphis and Don Robey’s Houston-based Duke imprint.” Both are represented on this compilation.

The set begins in June 1953 with Parker and his band, Little Junior’s Blue Flames, recording his first hit song, “Feelin’ Good,” at the fledgling Sun Recording Studio. Using a combination of spoken word storytelling and sung lyrics over Floyd Murphy’s rockabilly style guitar, the song became an instant classic. If not for the dialogue, listener’s unfamiliar with Parker might be fooled into thinking this is an early Elvis Presley song, but Elvis didn’t step foot into the studio until two months later. Dahl makes a strong case for Parker’s lasting influence on rock ‘n’ roll. The West Memphis native’s songwriting was well-suited for the rockabilly era, and two years after Parker wrote and first recorded “Mystery Train” (included on this set) it was picked up by Elvis, who made it a hit. As hard as Parker and his band rock on this compilation, he was never able to achieve crossover success. Regrettably, this is not an atypical story for Black artists in the 1950s (or for Black rock artists of later generations).

The majority of the tracks highlight Parker’s releases for Duke after he jumped labels. Some of the highlights include Parker’s harmonica 1956 harmonica debut on “Mother-In-Law Blues,” the lively dance track “Barefoot Rock” from 1958, “Pretty Baby” featuring electric blues guitarist Auburn “Pat” Hare, the big band arrangement of “Peaches” featuring the Al Smith Orchestra, and his 1958 version of “Sweet Home Chicago” (attributed to Roosevelt Sykes) which predates and arguably eclipses the more well-known versions. Another Roosevelt Sykes song, “Driving Wheel,” was revived by Parker into a churning, horn-heavy R&B hit, but the flip side’s “Seven Days” is the real winner, with influences ranging from the Isley Brother’s “Twist and Shout” to Little Richard’s gospel-infused “whoo whoos.” The Little Richard influence emerges once again on the closing track from 1963, “If You Can’t Take It (You Sure Can’t Make It). Interestingly, the songs is attributed in the copyright registry to Leva Mae Penniman (Little Richard’s mother),  but was presumably penned by Richard.

With Little Junior Parker Rocks!, Bear Family once again succeeds in bringing to light those like Parker who contributed to rock and roll but were never widely acknowledged for their role.