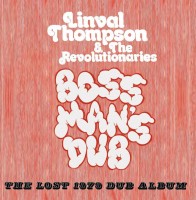 The late 1970s were a critical and extremely creative time for the development of dub music. The Revolutionaries, comprised of the amazing talents of Sly Dunbar, bassist Lloyd Parks (later augmented by Robbie Shakespeare ) and Tommy McCook, among others, helped to churn out some of the most unforgettable dub tunes of that era, and of dub music in general.  Likewise, Linval Thompson, after teaming up with renowned producer Bunny Lee, began to establish himself as an extremely talented musician as well as producer. Thus, the combination of an adept studio band with an equally gifted producer was a match made in heaven. However, as often happens, essential recordings disappear or are lost to the passage of time. Boss Man’s Dub, released at the height of dub excellence in 1979, was one such album, resulting in its incredible rarity.  But after decades without a proper reissue, Hot Milk has brought this old classic back into the spotlight. Now this remarkable album that collects dub versions from the likes of Freddy McKay, Michael Black, and Anthony Johnson as well as Thompson himself, can once again be enjoyed to the fullest.

It’s a cover of a Delfonics’ tune that first introduces the listener to Boss Man’s Dub. Thompson’s dub version of the classic “La La (Means I Love You)” is warped and formed in a way that preserves the solid horn section, as Thompson’s vocals come together with guitar right before the bass hits and takes over. As Thompson continues with scattered vocals and the temporary chorus, keys are dispersed throughout along with the twang of guitar. Continuing along, Freddy McKay (of “Picture On The Wall” fame) gets a dub interpretation on the rare track “Gonna Be Sorry,” with lazy horns maintaining a solid groove that periodically combines with guitar, while bass and drums keep the slow yet energetic track moving forward. Rounding out the original tracklist is none other than Anthony Johnson, riding the Declaration of Rights riddim on “Africa.” Though drums oddly dominate the intro, the bass brings in that ever-familiar line while guitar and keys compliment where necessary to create a tight, but unfortunately short track.

Boss Man’s Dub is an album well overdue for a reissue. The delightful dub rendition of “La La (Means I Love You)” and the somewhat melancholy horns on “Gonna Be Sorry Dub” make these two tracks alone worth a definite listen. The remastering of the album is phenomenal, with subtle sounds that further showcase the extraordinary sonic layers that dub versions are capable of. And for those wanting even more, this release features two equally-compelling bonus tracks: Sammy Dread’s dub version of “Morning Love” as well as the famous Cornell Campbell performing “Wherever You Need Me.” Boss Man’s Dub is another solid album released by the folks at Hot Milk, who are among those leading the way in amazing reissues of once-lost albums.