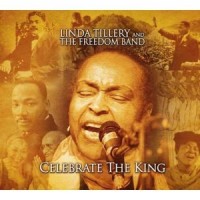 This tribute to Dr. Martin Luther King, Jr. was released last spring, too late for 2012 celebrations, so we’re putting it at the top of our list for 2013.  The four track EP is a compilation of inspirational songs on themes of freedom, composed by Linda Tillery and performed by a pick-up group appropriately called the Freedom Band (Linda Tillery, Calvin Tillery, and Nicolas Bearde, vocals; Rico Pabon, spoken word; Danny Armstrong,  trombone; Tammy Hall-Hawkins,  keyboards; Camilo Landau, guitar; David Belove , bass; Paul van Wageningen,  drums).  Tillery, who is perhaps best known in recent years as the leader of the Cultural Heritage Choir, brought these musicians together to play a special concert honoring Dr. King in Oakland, CA.  In her words, “the performance was so magical that the band had to be recorded.”

All of the tracks maintain a distinctive ‘70s jazz/soul vibe―not  surprising considering Tillery was lead vocalist for the San Francisco band The Loading Zone from 1968-69 and also worked as a studio musician throughout the ‘70s.  “Freedom Time” was actually composed in 1978, but updated in 2011 to include a spoken word section, in this case featuring socially conscious Bay-area rapper/musician Rico Pabon (a member of Tillery’s Cultural Heritage Choir).  The title track, Celebrate the King, will no doubt become a fixture at many future celebrations.  Highly recommended!