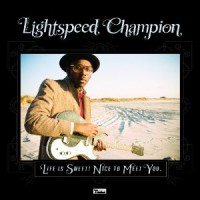 Title:  Life is Sweet! Nice to Meet You

The second solo album from Lightspeed Champion (aka Devonte Hynes) finds the 24 year-old Brit moving further into pure pop and away from the indie rock sound of his first album, Falling Off the Lavender Bridge. The ironic quirkiness and unexpected juxtapositions of musical elements found on Lavender Bridge continue on Life is Sweet!, but Lightspeed Champion wears his musical influences on his sleeve here, channeling the history of pop from the ‘50s onward, as well as musical theater and even classical keyboard repertoire.

Lightspeed Champion’s vocals take on more prominence on this album as well, sitting at the front edge of the sound and leading the accompaniment in surprising directions.  Drawing on Motown and ‘70s glam, the opening ballad “Dead Head Blues” sounds oddly reminiscent of Queen—while Hynes can’t compare to Freddie Mercury in presence or vocal virtuosity, he commits with an unabashed sincerity akin to Mercury’s, backed by soaring rock guitar and strings.  A greater sense of theatricality becomes evident, too, on tracks like “The Big Guns of Highsmith,” which sounds like what would happen if the Sgt. Pepper-era Beatles produced a Broadway musical in the late 1990s.   Meanwhile, he evokes ‘50s doo-wop and ‘60s girl groups in the Chopsticks-esque piano accompaniment, swooping string codas, layered backing vocals, and lovelorn plea of “I Don’t Want to Wake Up Alone.”

Several of the tracks feature pairings of contrasting musical styles that work in spite of themselves, as in “Marlene,” which suggests classic Talking Heads pop punctuated by string stingers from ‘70s funk.  Even Hynes’s fondness for country and folk is reflected here in “Sweetheart,” which starts out for all the world like a forgotten Johnny Cash song.  Life is Sweet! delivers four pared-down instrumentals as well, single-note palate-cleansers in the midst of so many stylistic fusions: “Intermission” is an introspective synth meditation, “Intermission 2” delivers a mellow Afro-Caribbean percussion groove, “Etude Op. 3 ‘Goodnight Michalek’” allows Hynes to experiment with writing a classical piano etude, and the closing track “A Bridge And A Goodbye” combines electric bass and celesta to create a delicate final coda to the album.

Following is the official video for “Marlene” (courtesy of Domino Records):

Life is Sweet!  Nice to Meet You is a strong sophomore effort, surpassing Lavender Bridge.  Lightspeed Champion’s gift for orchestration and arranging has always been his strong point, and it shines here.  At the same time, his lyric-writing skills have improved, giving his songs more focus and expression, and his vocals are stronger, integrating better with his accompanying textures.