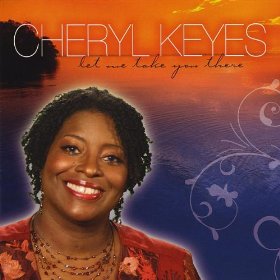 Let Me Take You There, the debut album by Dr. Cheryl Keyes for Keycan Records, is a must have for those who are searching for that eclectic music production. Put succinctly, this project, nominated for the 2009 NAACP Image Award in the category of Outstanding World Music Album, is a shining light in the era of monotone harmonic and melodic vamps and mindless lyrics that saturate the airwaves. Keyes, a professor in ethnomusicology at UCLA, composed, arranged and orchestrated all of the music on the CD and contributes background vocals, keyboards, and flute.  Her backup band features Gerald Pinter and Charles Owens on saxes, Bijon Watson on trumpet/flugelhorn, Phil Ranelin on trombone, Lionel Loueke and Wali Ali on electric guitars, Frederico Ramos on acoustic guitar, Robert Hurst on bass, Ralph Penland on drums, and Munyungo Jackson on percussion.  The ten tracks consist of essential funk, earthy shuffle, romantic, jazz, soft rock, and rhythm and blues ballads interspersed with Brazilian and Latin flavors.

Keyes’ project hearkens back to the early ‘70s when albums were diverse and lyrical content was more thoughtful.  However, make no mistake, this music is not dated.  In fact, it is very progressive.  For instance, “Sleeping With The Enemy” is a shuffle groove that references the Godfather of Soul’s “Doing It To Death” (you should upgrade your soul and funk catalogue if you don’t know this song) and develops the blues in a unique way.  Keyes borrows from the harmonic and rhythmic foundation of the song, creating a smoother adaptation.  In addition, instead of the “funky good time” expressed by James Brown, Keyes superimposes lyrics highlighting an intimate relationship with the wrong person over a funky beat.

The groove of “Sleeping With The Enemy” is infectious to the extent that the story line Keyes inserts establishes a sense of irony: How can one sing of such misery over a “feel good” pallet?  Wait…isn’t that an aspect of the blues?  Keyes demonstrates that we can still transcend a bluesy circumstance via blue tonality.  If you’re not sure about my perspective concerning the body of this song, simply listen to its intro. It is a dead giveaway, complete with thunderous sound affects and a minor key center established by piano and strings in low to mid registers signifying the 1991 film Sleeping With The Enemy, a love tragedy starring Julia Roberts.  Then, we suddenly groove to the orchestrations and warm alto vocal textures of Keyes expounding about a blues event with the adversary.

“My Fantasy” is another progressive moment reminiscent of an art song with a lush romantic style orchestration. This track is a representation of melodic poetry that expresses an innocent and, some might say, idealistic yearning for unrequited love and eternal friendship. Keyes’ head-tone and forward focused vocals on this track demonstrate that she is no novice to singing. She delivers a thoughtful word painting that is filled with arch-shaped phrases, allowing the listener to visualize the peaks and depths of desire and unfulfilled emotions.

“Wind Me Up” is just straight funky!  The punchy horns, wah wah guitar, rim shots on the beat, and Keyes’ soulful vocal runs and slurs hump (groove) all the way to the “One” (for those who are not true funkateers, the “One” is the socio-musical, political and psychological focal point of the groove-in other words, when you feel like turning up your nose and dancing, you’re probably feelin’ the “One!”). This song will dance you from beginning to end as Keyes’ lyrics and vocal delivery tell the story of that special pleasure one receives from an insightful significant other.  Another notable track is “Hyacinth,” a contemporary jazz piece that not only presents Keyes’ command of the genre’s vocal tradition, but also her impeccable technical and language facilities on keyboard and flute.

With the exception of the abrupt beginning of the first track, “Feelin’ Down,” the songs are well positioned and the sound production is very clean. However, the mix warrants minor fine-tuning, as some instruments such as the drums tend to be too forward, which results in loss of vocal essence.  In addition, Keyes’ vocal mix (lead vocals) could be a little dryer (less reverb), warmer (more bass frequencies) and have more presence and clarity (more amplitude and mid frequencies) on some tracks (see “Let Me Take You There”). We could only wish that these meager issues were the problems of most radio hits today.  In this project, there are no musical gimmicks such as hiding behind the vocoder (you know, Roger from Zapp could really sing!!).  Nor is there a flamboyant CD cover with scantly dressed people to take your mind away from the musical lack…the list goes on! Let Me Take You There is a quintessential representation of an artistic product steeped in the Black continuum.  Dr. Keyes has certainly done what the producer (Dr. Charles E. Moore) states in the liner notes.  That is, she presents music that distinguishes her “versatility at songwriting, composing, and arranging in various styles…and by her unique voice.  Without a doubt, she is truly a phenomenal talent!”