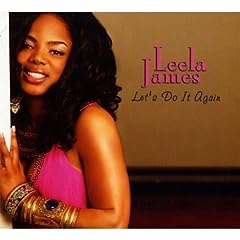 Title: Let’s Do It Again

Leela James’ Let’s Do It Again consists of eleven covers of classic songs made popular by timeless artists such as James Brown, Al Green, the Rolling Stones, Angela Bofill, and the Staple Singers. This album arrives some four years after her debut, A Change is Gonna Come, on the Warner Brothers label. Her project seems to be designed to address a question she posed in “Music,” her first single from that album, “what happened to the music?” The answer – It hasn’t gone anywhere. She and her band are fully prepared to provide it and do so with passion on this, her sophomore offering, released on the Shanachie label.

The Los Angeles born vocalist tackles the catalog of some of her idols, channeling the R&B, soul, funk, and even gospel sounds that comprised the soundtrack of her upbringing and which informed her debut album. James brings a contemporary appreciation for the classic sounds of the masters to whom she pays homage here.

The album begins with the familiar guitar licks of “Clean Up Woman,” putting the listener on notice that the things that made the standards great won’t be tampered with here. In fact, unlike so many contemporary artists, James deigns to produce this album using live recording sessions with her instrumentalists, valuing not only the tried and true sounds but the methodology that helped produce the originals. That doesn’t mean that her sound is without innovation. On “I Want To Know What Love Is,” James compliments the soft rock sensibilities of Foreigner’s version with even more gospel influenced vocals and chord progressions than came through on the original recording. Her vocal ad lib on this tune also gives a shout out to Bill Withers’ “Ain’t No Sunshine When She’s Gone.”

If James allows her backing vocalists to shoulder some of the heavy lifting on “I Try,” it doesn’t take away from the soulfulness of her vision for the song. Her interpretation of Bootsy Collins’ “I’d Rather Be With You” remains true to the funk slow jam of the original. She concludes her album with the eponymous “Let’s Do It Again,” which captures the celebratory groove of the Staples Singers’ original and makes plain and explicit the mission of the album as a whole.

Following is the video for her cover of James Brown’s “It’s a Man’s Man’s Man’s World” which is also featured on the album:

The only drawback to this release is the lack of liner notes, which might have offered insight into James’ conceptualizations of her contribution to the legacies she’s acknowledging in this album. That said, savvy and technologically forward-thinking listeners will avail themselves of her website for more information along these lines.

Overall, this project offers much to music lovers whose sensibilities for soul, funk, R&B, rock, and gospel, and whose appreciation for the seamless interweaving of all of the above, can keep pace with that of Leela James. Definitely worth a first listen and then a second and third to catch the nuances that are likely to have been missed the first times through.