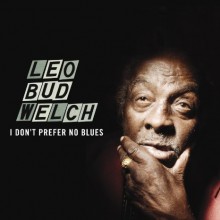 Title: I Don’t Prefer No Blues

In January 2014, 81-year-old Mississippi native  Leo “Bud” Welch released his debut album, the gospel oriented Sabougla Voices. Bud began playing his older cousin’s guitar at the age of thirteen, sneaking the instrument while his cousin was working. By the age of fifteen he was performing the blues publically and continued to do so until the age of 43, when he began playing mostly gospel music with his sister and sister-in-law, known as the Sabougla Voices. His new album, I Don’t Prefer No Blues, is a follow-up to the earlier release and fulfills his deal with label owner, Bruce Watson, to release a gospel and then blues album. Highlights include the traditional “Poor Boy,” “Girl in the Holler” with its driving rhythm and whining guitar, “Goin’ Down Slow,” and “So Many Turnrows” which tells of his childhood on a farm. I Don’t Prefer No Blues firmly situates this octogenarian into his rightful place as recording artist and blues musician.