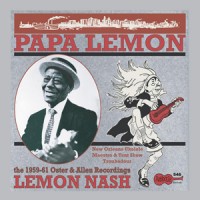 Arhoolie producers Chris Strachwitz and Adam Machado provide a glimpse into the early world of jazz and medicine shows through these rare recordings of Lemon Nash (1898-1969). Better known in New Orleans’ French Quarter as Papa Lemon, Nash was a ukulele maestro from Storyville who earned his living in the 1920s traveling with circuses and medicine shows, “hawking blood tonic and performing from his vast repertoire on the uke.” By the 1950s he was a fixture on Bourbon Street—one of the many colorful street performers hustling tips from tourists and locals.

Jazz historians Richard B. Allen and Bill Russell interviewed Nash on three occasions between 1959 and 1961.  Excerpts from these oral histories are interwoven between songs, with Nash reminiscing about New Orleans jazz musicians and his lucrative job hawking Royaline Blood Tonic for the Big Chief Indian and Western Cowboy Show. Offering a fascinating glimpse into the past, these stories contextualize the songs and clearly set this album apart from standard reissue projects.

Music on the disc was from culled from four hours of recordings at Tulane’s Hogan Jazz Archive, as well as from the collection of Dr. Harry Oster, founder of FolkLyric Records.  The songs, many released here for the first time, include early blues and popular hits of the day like “Sweet Georgia Brown,” as well as music from minstrel and vaudeville shows such as “Anyone Seen My Kitty?” Other highlights include a fast picking instrumental version of “What a Friend We Have in Jesus,” the Crescent City favorite “Bourbon Street Parade” written by Nash’s contemporary, the celebrated jazz drummer Paul Barbarin, and “Bowleg Rooster, Duckleg Hen”—Nash’s re-creation of a medicine show performance.

Machado’s extensive liner notes provide enlightening biographical details and include the only two images of Nash, plus rare images of medicine show performances, courtesy of the Library of Congress.  This fine package will delight fans of early jazz, blues and ukulele music, as well as those interested in the history of New Orleans, vaudeville, and medicine shows.