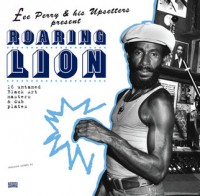 Roaring Lion is the latest in a series of releases from Pressure Sounds of rare 1970s cuts from Lee “Scratch” Perry’s work in his homemade studio the Black Ark. The “Black Art” mentioned in the subtitle is one of the labels Scratch used for releasing and distributing purposes. According to the accompanying booklet by Jeremy Collingwood, the selections on this disc were recorded or remixed in 1976 and were never included on any album or other commercial release.  Included are “a dozen tracks straight off a single master dub tape” along with some previously unissued selections. These tracks are all heavily dubbed with even more than usual of the sound effects, distortion, and multiple tracking for which Scratch is justly famous. Having never been issued, most of these tracks are not mentioned in the various Perry discographies, but given the helter-skelter nature of record keeping in the Jamaican music industry of the time, and at the Black Ark in particular, this is not all that surprising. These recordings originally appeared on dub plates intended for use by the local sound systems in Kingston’s outdoor street parties and dancehalls.

Strong bass lines were a must, not only because they define reggae and dub, but also to carry the sound long distances in order to attract crowds to the sound systems’ set-ups. As Collingwood notes, “Scratch employed an ever changing cast of musicians,” so individual credits are hard to assign, but the bass players listed are Boris Gardiner from Scratch’s house band the Upsetters, and a young Robbie Shakespeare who became half of Sly & Robbie, among the best known bass and drum contingents in reggae, and world music stars in their own right. Augustus Pablo’s eerie melodica riffs and Vin Gordon’s evocative trombone stylings twist through the mixes, while Scratch, Skully, and Sticky add their trademark percussion lines. Backing vocals are provided by the members of Full Experience featuring Aura Lewis and Candy McKenzie, both of whom have seen vintage recordings they did with Perry finally get issued in the last few years. With the constant re-releasing of Black Ark obscurities being done by various labels, Scratch’s works would seem to never be entirely lost. The tracks collected here were intended for immediate, very temporary duty with the sound systems with no thought given to preserving them in a more permanent medium. Consequently the sound quality of the surviving source material is a little bit rough and noisy in places, but in its way this only enhances the murky and mysterious mood the songs set.

“By 1976 Perry was helping to transform [dub] into an art form and he was beginning to create several different dub mixes of each rhythm [i.e., instrumental track].” This “re-mixing strategy meant he could offer different product to UK companies and exclusives to Sound Systems” for “several hundreds of pounds for each dub plate.” Scratch’s income was greatly augmented by this practice giving him the wherewithal to, among other things, buy more studio gadgets to augment the Black Ark’s recording capabilities. Most of the songs on this album are re-cuts of previous recordings. Therefore familiar bits, beats, and melodies rise and fall in the individual mixes, sometimes identifiable and sometimes not, possibly because some of these intricate creations are dub versions of previous dub versions of earlier recordings. Three Jah Lion cuts are included: “Truth and Rights” and “Generation from Creation” have him toasting over Winston Heywood & the Hombres’ “Backbiting” and “Africa.” The song “Roaring Lion” contains the quintessentially Scratch lyric “When the lion roar, the weak heart tremble,” which Jah Lion delivers with gusto. Rather than a re-cut, this track appears to be a Jah Lion/Upsetters original with tasty dub effects (including a very nice melodica line) added to the mix. Jah Lion was Jah Lloyd when he recorded for other producers (including himself), but Scratch credited him as Jah Lion. Scratch’s universe does not always correspond to mundane reality, then and now. Other highlights include “Emotional Dub” by Junior Murvin (based on his “False Teaching” from the Police and Thieves album) and “Rocky Road,” which starts with a vocal line “from unknown vocalist” and segues into “a rhythm dub of the Fantails’ ‘Stand & Look.’” That Fantails’ number was originally recorded at King Tubby’s studio for sound system operator Fatman who “requested that Tubby make use of a phaser in an effort to emulate Perry’s Black Ark sound.”*  Then there’s a previously unreleased dub of Bob Marley’s “Natural Mystic,” which was “cut for Jah Wise’s Tippertone Sound,“ and is “the original dubplate mix of what became one of Bob Marley’s most iconic tunes when re-recorded for Island” Records after Bob signed with Chris Blackwell’s label. “This early take was made more eerie than the later version on Marley’s Exodus album by the inclusion of a haunting male chorus that Scratch overdubbed at a later session with the Meditations; Marley was not present when the harmonies were laid.”** This version of “Natural Mystic” was “never officially completed”** so this is the first non-bootleg release of it to be available.

Collingwood asserts the selections contained here “are real ‘smokers’ delights’ as they weave patterns in glorious swirling and bouncing rivers of sound.” Of particular interest to the smokers might be “Loco Negril,” Scratch’s maximally dubbed version of an Althea & Donna song (“Going to Negril”) that sounded a lot like their mega-hit “Uptown Top Ranking.” Scratch gave it a full dub treatment not unlike how he created “Disco Devils” from Max Romeo’s “I Chase the Devil.” Eerie sounds, echoes, ethereal horns, and a particularly booming bass line turn the song into the reggae equivalent of psychedelic rock. “Anasawa Dub” and “Dub Dyon” are further dubs on the dub track called “Dyon-Anasaw” on Scratch’s Return of the Super Ape album. “Beat Down Comrade Man” is Junior Byles’ revoicing of his own “Beat Down Babylon,” recast as a political endorsement of 1970s People’s National Party leader Michael Manley. Perhaps American political campaigns might be improved by introducing dub techniques to campaign songs. Also included are “Big Gal Sally” and “Big Boy Wally,” spirited dubs of Scratch’s “slack” masterpieces “Big Pussy Sally” and “Big Cocky Wally.” The altered titles may reflect the less salacious lyrics presented here, but the lyrics are tamer mainly because so much of the vocals drop out of the mix or are distorted beyond recognition. Artistic in its own way.

Scratch’s work at the time (“fueled by spliffs and rum and rum and spliffs”) “wrapped up political and cultural voices in a dense ‘dub-reggae’ sound: a sound that came to define the Black Ark.” Shortly after these tracks were recorded, Perry would leave Jamaica because of the violent political and social milieu that was a consequence of the ongoing street war between the two major Jamaican political parties—a phenomenon described in Scratch’s biographical opus “City Too Hot” (a 1977 single later re-released by Mojo Magazine). Scratch is still active, recording and touring, but sounds like these gems from the Black Ark have never been equaled and probably never will be. Thanks to Pressure Sounds for bringing them back.

All quotes not otherwise attributed are from Jeremy Collingwood’s booklet and liner notes.

Pride / Augustus Pablo and the Upsetters

Stand and Look / the Fantels