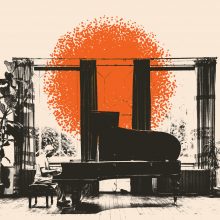 Long before he became known as a pioneering Afro-Transcendentalist and ambient music icon, Laraaji (aka Edward Larry Gordon) spent his youth playing gospel music in a New Jersey church. After majoring in piano and composition at Howard University in the 1960s, Laraaji’s journey led to stints as a busker, mystic, laughter meditation practitioner, and leader of the fusion band The Winds of Change, before finding his true calling as a multi-instrumentalist performer and composer of “space age soul hymns” and “cosmic zither jams.” His 1980 release, Ambient 3: Day of Radiance, on Brian Eno’s renown Ambient series, brought significant international exposure. Over the past forty years, Laraaji has primarily continued in the same vein, releasing a large body of recordings to facilitate meditation and spiritual awakening. His latest project, however, is a significant departure. On Sun Piano, Laraaji comes full circle, returning to church to record a series of more classical and jazz-oriented solo piano miniatures.

The album’s 12 tracks, recorded live at the First Unitarian Church in Brooklyn, are improvisatory in nature. Opening with “Embracing This,” the title seems to challenge his large fan base to revel in the sound of a single, acoustic instrument. While many of the tracks, such as “Lifting Me,” still have a meditative and somewhat repetitive minimalist quality, others, like “Shandoah” riff on folk tunes. Closing with “Embracing Timeless,” Laraaji offers a contemplative work that lulls the listener towards a state of enlightened consciousness. Perhaps not a significant departure, after all.

Sun Piano is the first release in a trilogy that will include Moon Piano recorded at the same session (due October 9) and an extended EP of piano/autoharp duets anticipated later in 2020.