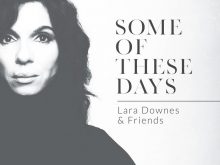 If there were ever an album that captured in music the interconnected nature of the fight for justice across generations, it is pianist and activist Lara Downes’ Some of These Days. Blurring genres, varying instrumentation, and collaborating with other musicians, Downes brings us an album that, track after track, delivers deeply moving and heartfelt performances of spirituals and freedom songs. First conceived in antebellum times as multilayered expressions of sorrow, longing, and joy—psychological coping mechanisms to deal with the trauma of slavery—these songs took on still new meanings when sung one hundred years later by Civil Rights activists, including her Harlem-born African American father and Jewish mother. And evident through Downes, these songs are still speaking to us today.

Past and present are quite literally connected in the opening track, “Sometimes I Feel Like a Motherless Child.” Downes’ pianistic rendition of the spiritual arranged by Stephen Buck is at times sweeping, at times bleak. But it is framed by a 1939 field recording of three individuals, incarcerated in the Jim Crow South, singing the same melody. One is immediately engulfed by what Downes refers to in her beautifully written and contemplative liner notes as the “sorrow that belongs to the long arc of history” communicated through this music, connecting the forced separation of enslaved families to refugee families ravaged by war and famine, and still others destroyed by opioids.

The album also features collaborations of the present between Downes on piano and, on various tracks, the likes of folk singer/guitarist Toshi Reagon, vocalist/guitarist Howard Fishman, violinist Adam Abeshouse, trumpeter Alphonso Horne, the Chaplin Sisters, the PUBLIQuarter, and the vocal ensemble MUSICALITY. On some of the tracks they perform new arrangements of spirituals, while others are re-arrangements, such as “Hold On.” Originally set for voice and piano by Margaret Bonds, here it is adapted for piano, string quartet, and vocal ensemble. Though professional recordings of Bonds’ original settings are themselves too few in number, the layers of sound which emerge from the varied scoring in this recording are richly satisfying. Perhaps the varied scoring even reflects the multi-layered meanings of the spiritual text itself. Most incredible is “Steal Away,” in which Reagon’s vocals and guitars, Downes’ pianism, and even quotations from “The Alcotts”—a movement from Charles Ives’ Concord Sonata for piano—come together in a moving musical mosaic, threading together voices and meanings across time and space.

Also featured are several numbers for solo piano, including two never-before-professionally-recorded compositions based on spirituals or spiritual-like melodies by Bonds and her teacher Florence Price. Downes is at her best in Price’s Fantasie Negre No. 2 in G minor, recently edited by John Michael Cooper and soon to be published by G. Schirmer. Price wrote the work in 1932, the same year as her Symphony No. 1 in E minor which was performed by the Chicago Symphony Orchestra the following year—the first symphony by an African American woman to be performed by a major symphony orchestra. Price’s sweeping orchestral piano writing presents two different themes in alternation, connected through powerful virtuosic excursions that heighten the drama and make each arrival at a new verse all the more satisfying. Downes also captures bittersweet moments of introspection before the rousing conclusion, demonstrating her clear command of the instrument. Downes’ other world-premiere recording on this album is Bonds’ “The Bells,” based on the spiritual “Peter, Go Ring Dem Bells.” My only quibble is with some questionable notes in the climax preceding the brief cadenza, probably resulting from ambiguity in Bonds’ manuscript at exactly where the key signature should change from E-flat to C major. Downes chooses to retain the flats a few measures beyond where C major has arguably been reached.

The last track of the album, an interview between Downes and writer Jacqueline Woodson, sums it up: “We’re not here because we ‘arrived’ some years ago—we’re here because of the people who came before us, and what they did to get us here,” says Woodson. To which Downes replies, “And it’s the stories you know and also the stories that you don’t know that keep you digging….It’s not just the music, it’s the storytelling.…I’m taking the music and pushing it outwards into part of the bigger story.”

Downes’ album release workshop tour, which would have brought this music to youth choirs and at-risk children across the country, has sadly been cancelled due to COVID-19. But cancelled events haven’t stopped her from raising money for Feeding America, a national organization combating food insecurity, especially important for those in need during this public health crisis. Those who make a donation to this organization can receive a signed copy of the album. Downes’ liner notes also connect themes from each song to social justice issues faced today and include information on how to support specific organizations, such as the Women’s Refugee Commission and Equal Rights Watch.

Lara Downes’ Some of These Days should be considered essential listening and reading—both as nourishment for the spirit during these difficult times and as a call to action for justice fighters.