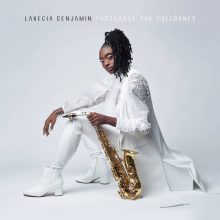 Virtuosic saxophonist Lakecia Benjamin offers a powerful homage to two major jazz figures, Alice Coltrane and John Coltrane, on her newest release Pursuance: The Coltranes. Though her first two albums as a bandleader, Retox (2012) and Rise Up (2018), draw heavily upon soul and funk influences, Pursuance showcases Benjamin’s versatile performance of seminal jazz works from the Coltranes’ repertoire. Covering multiple musical periods across the album’s 13-tracks, Benjamin is supported by a phenomenal multi-generational line-up of over forty artists, including Ron Carter, Gary Bartz, Regina Carter, Jazzmeia Horn, and Brandee Younger, among others. Legendary jazz bassist Reggie Workman, a member of the John Coltrane Quartet in the early 1960s, co-produced the project and is also a featured guest.

In the album trailer, Benjamin explains that she wanted to provide equal representation on her tribute to the Coltranes, ultimately selecting seven compositions by John and six by Alice that reflect how they have profoundly influenced each other. Benjamin first came to John Coltrane’s music through Alice Coltrane, which led her to ask the obvious question, “Why only have one Coltrane and only one side of the coin?” Pursuance not only serves as Benjamin’s reflection on the Coltranes’ musical legacy, but also demonstrates Benjamin’s masterful playing and understanding of various styles, as well as her creative arranging skills.

Of course, a Coltrane tribute album would not be complete without honoring John Coltrane’s A Love Supreme (1965). Benjamin includes a stirring arrangement of “Pursuance” and a moving rendition of “Acknowledgement,” the latter featuring the vocal prowess of Dee Dee Bridgewater and the profound narration of Abiodun Oyewole (The Last Poets). Additionally, listeners can experience superb renderings of “Prema,” “Going Home,” “Om Shanti,” “Alabama,” and “Turiya.” The album fittingly ends with Alice Coltrane’s composition “Affinity,” which begins with a saxophone trio harmony followed by high energy solos from Benjamin, Greg Osby and Reggie Workman.

Pursuance: The Coltranes showcases Lakecia Benjamin’s command of the jazz idiom while highlighting the music of two of the late and great jazz luminaries, Alice and John Coltrane. Benjamin’s spirited commemoration surely does her icons justice while putting the music world on high alert for what’s to come next from this talented young artist.