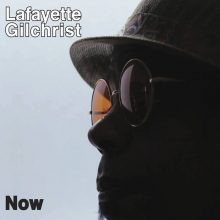 Baltimore-based composer and jazz pianist Lafayette Gilchrist offers a new double album, Now, that’s brimming over with his signature genre-spanning tunes. Though his recordings over the past decade have featured larger ensembles, for this project Gilchrist returns to the more intimate trio format with bassist Herman Burney and drummer Eric Kennedy. Addressing topics that range from the state of race relations and daily struggles faced by many within and beyond the city of Baltimore, to the more romantic aspects of love and life, the music reaches deep into the heart and soul of the community and the nation as a whole.

Gilchrist opens the set with one of his most well-known works, “Assume the Position,” which was featured on the HBO series, The Wire. Originally performed by his fusion band, the New Volcanoes, the protest song about police brutality is reinterpreted here for the trio format but still maintains its menacing edge and rhythmic intensity. Dedicated to the spirit of enslaved Maroons throughout the African diaspora, “On Your Belly Like a Snake” incorporates folk melodies into a densely layered harmonic and rhythmic arrangement that represents the tension between a rebellious field slave and a more compliant house slave. An avid student of the roots of jazz, Gilchrist is clearly in his element on “The Midnight Step Rag,” a jaunty tune with a contemporary flair that incorporates hip hop elements in the percussive effects. Brilliantly performed by Gilchrist and Kennedy, this modern rag is one of the highlights of the album. “Old Shoes Come to Life” is another throwback to an earlier era, setting folksy melodies against snare drum while maintaining a swinging groove.

Gilchrist’s more romantic ventures include the lush “Newly Arrived,” inspired by Sade’s 1988 song “Love is Stronger Than Pride,” and upbeat ballads such as “Say a Prayer For Our Love” and “The Wonder of Being Here.” Though lacking the cleverness and complexity of the aforementioned tracks, these ballads do provide Gilchrist with an opportunity to indulge in a more sensual style of playing. Concluding with “Specials Revealed,” the trio wraps up the set with aplomb, with each member contributing equally to the sonic palette.