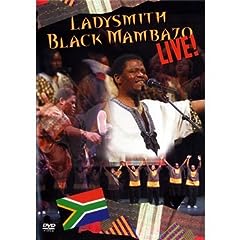 In the forty-five years that Ladysmith Black Mambazo has been together, the group has served as South Africa’s cultural and musical ambassadors, breaking color barriers during the Apartheid era and introducing the rest of the world to Zulu isicathamiya vocal harmonies.  Most Americans first encountered Ladysmith Black Mambazo from their 1986 collaboration with Paul Simon on Graceland, which brought them international acclaim; since then, their performances have ranged the cultural spectrum from singing for Nelson Mandela’s acceptance of the Nobel Peace Prize in 1993, to appearing on Sesame Street.  This month, Bloomington residents could catch Ladysmith Black Mambazo performing live, first in person at the IU Auditorium on March 2, then on WTIU’s March 3 re-airing of the 2007 PBS special “Paul Simon: The Library of Congress Gershwin Prize for Popular Song.”   If you missed either of these, or you just can’t get enough, the new DVD Ladysmith Black Mambazo Live! offers a full live performance, rich enough to make you think you were there.

The main set comprises ten songs plus two encores, equally in English and Zulu, and representing Ladysmith Black Mambazo’s diverse influences from pop, freedom songs, and gospel.  The lyrics to “Hello My Baby” are pure bubblegum pop, but with the group’s warm harmonies and playful storytelling choreography, it becomes a celebration of the giddiness of new love.  “This is the Way We Do (Ekuhlupekeri)” showcases the group’s integration of gospel hymns, alternating half-spoken full-ensemble sections with a soloist softly floating above a supporting ostinato on the phrase “the way we do” by the rest of the group.  “Long Walk to Freedom (Halala South Africa)” commemorates Mandela’s Nobel Prize, and urges South Africa not to stop moving forward out of its dark past and towards equality.  No set would be complete, of course, without “Homeless,” the group’s breakthrough piece from Paul Simon’s Graceland, and one of their encore pieces is a medley of “Amazing Grace” and “Nearer My God To Thee,” illustrating again Mambazo’s gift for combining American hymnody with Zulu vocal harmonies.

While the musicianship is everything one might expect from hearing a Ladysmith Black Mambazo album, one of the real advantages of having a live performance on video is the visual factor-and what comes across here is how much these men are not only cultural ambassadors, but also veteran showmen.  Dance is an important element of their performance, both to deepen the narrative expression of the song lyrics, as well as to add humor and excitement when appropriate, and their costumes (colorful shirts, black pants, and bright white shoes) highlight every kick and step.  At times, however, the choreography takes them away from the microphones while singing, leaving a gap in the audio, which makes one wish they had headsets instead of stand microphones.  In “Thulanhliziyo,” they stage a mock isicathamiya competition between themselves and the audience-the audience wins, though not without a lot of humorous protests about dancing and women from the younger members of the group.

This performance was filmed in Ohio at the University of Akron (a fact not advertised on the external packaging of the DVD), and the stage is set simply enough that it could have taken place anywhere.  While this may seem less prestigious than some of their other live DVDs (Live at the Royal Albert Hall, 1999, or Live in Montreux, 2005), having less emphasis on the place allows for more emphasis on the performance itself.  The camerawork is cleanly edited, comprising just a few different angles, and a tasteful mixture of close-ups (mainly on soloists) and full-group shots.  The disc comes without any liner notes to speak of, but does have one bonus feature, a lengthy series of interviews with the members of the group.  The first and longest of these is the interview with founder and director Joseph Shabalala, who speaks of his youth and musical start in the town of Ladysmith, the founding of Ladysmith Black Mambazo and his vision of a new style of harmony, and the long history of the group.

“Indigenous music is a mirror.  It tells us who we are.  Traditions are like trees whose seeds are planted by God; through many generations, they grow strong and have many branches, which reach upwards towards the heavens.  It is my wish to plant seeds and secure the roots of our tree very deeply in the earth, so the strong winds of change cannot make it fall.  The deeper the roots, the stronger the tree.”