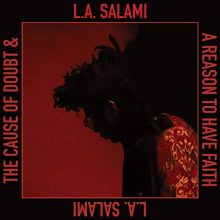 Described as classy rap, street-poet blues and fierce folk, the music of London artist L.A. Salami creates a truly unique and always evocative experience. Born Lookman Adekunle Salami, L.A. Salami began writing poetry from an early age, a hobby which eventually blossomed into writing poetic lyrics with acoustic-oriented instrumental backing. On his most recent album, The Cause of Doubt & a Reason to Have Faith, Salami ventures into more experimental ground as he draws on everything from ‘90s hip-hop and rap to psychedelic folk and proto-punk of the ‘60s.

The Cause of Doubt is L.A. Salami’s third full-length release and a departure from the singular vision presented on his earlier albums – Dancing With Bad Grammar (2016) and The City of Bootmakers (2018). His new and more varied influences are immediately apparent in the musical backing for his always poetic lyricism. In describing his inspiration for the album, Salami cites the deliberateness of modern music, the chaos of old music, and calls The Cause of Doubt “a love letter to Lou Reed and The Velvet Underground.”

Never one to shy away from political commentary, Salami pairs poignant lyrics about capitalism, anarchism, and racism with a hip-hop and rap inspired spin on “The Cage,” one of the album’s first singles. The third and final single from the album, “The Talis-man on the Age of Glass,” features genuine introspection and metaphorical lyricism as he explores the “undetailed reflection of ourselves” in the modern age. According to Salami, the video for the song, which shows him wearing blackface makeup and acting as a mime, is a reclamation of the style (as well as a subversion of negative stereotypes) associated with white minstrel entertainers of the 1800s.

The tracks on L.A. Salami’s latest project explore new musical influences while keeping the same powerful, poetic lyrics that earned him acclaim on his previous two releases. From grand existential musings to vignettes of everyday life as a Black man living in Britain, The Cause of Doubt & a Reason to Have Faith is yet another eccentric and expressive release from L.A. Salami.