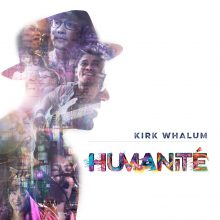 Memphis native and Grammy® Award-winning global recording artist Kirk Whalum has dropped his latest album, Humanité, which is unlike anything he has released before. Expressing the vision “With One Voice–At Times With Words–We Speak,” this project is the “synergistic result of encounters made and relationships formed onstage and off with some of the finest recording artists from all over the world,” many of whom are featured on the album. Kirk’s international collaborators include Japanese jazz pianist Keiko Matsui; bassist Barry Likumahuwa and global pop star Afgan from Indonesia; South African Afro-soul singer Zahara; Kenyan pianist Aaron Rimbui and percussionist Kasiva Mutwa; Nigerian-French R&B singer Asa; plus UK jazz pianist/vocalist Liane Carroll and many supporting musicians.

Earlier in his career, Whalum successfully made the leap from sideman to bandleader, joining forces with legendary jazz keyboardist Bob James in a touring and recording collaboration that led to five albums, including his first #1 record. From there, it was off to Los Angeles, where he became an in-demand session player for top artists including Al Jarreau, Luther Vandross, Quincy Jones, and most notably, Whitney Houston. Kirk’s sax solo on Whitney’s mega-hit, “I Will Always Love You,” made his sound familiar to untold millions and he spent seven years touring the world with the late superstar. Whalum now performs as a solo artist and has been producing amazing solo albums since 1995, including his highly regarded Gospel According to Jazz series that reflects his roots in the Black church as a preacher’s kid and ordained minister.

Humanité is an exceptionally inspirational album, not just for its lyrics, but for the higher purpose it serves. Whalum says, “People are normally afraid of what is outside of their culture, but we as musicians say, ‘Hey man, let’s mix this stuff up!’ Jazz is freedom of expression, communication of love, excitement, passion. Humanité is about identifying that beautiful thing that draws us all together and that causes us not to be afraid.”

Whalum opens the album with the classic Curtis Mayfield message song, “Move On Up,” featuring Brendon Reily. The second verse of the song describes the tone of the album perfectly:

Bite your lip and take a trip
Though there may be wet road ahead
And you cannot slip
So move on up
For peace will find
Into the steeple of beautiful people
Where there’s only one kind.

One of the most popular songs from the album is “Get Your Wings Up,” written and performed by New Zealand guitarist/vocalist Andréa Lisa. Kirk produced the track, which features his tenor sax and her guitar over a percussive click track. He later added a rhythm section while at James McMillan’s studio in England, explaining, “It’s maybe not the best way to make music, but if the musicians can feel where you’re coming from, you just plug in and it’s there.”

With Humanité, Whalum has produced an album for a worldwide audience that embraces different cultures and musical traditions while striving to bring all people together to celebrate humanity!