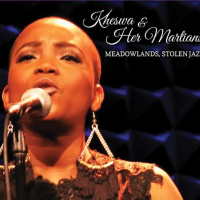 Rich, vibrant, and racially desegregated jazz communities began to emerge in both Cape Town and Johannesburg during the mid-twentieth century. These communities remained covert because Apartheid laws forbade the mixing of races in public places. South African music scholars such as Carol Muller and David Coplan have written about these communities and the artists that fled South Africa because of a desire to play their music without fear. Since the end of Apartheid twenty years ago, these communities have grown and created musicians passionate about their art. Kheswa & Her Martians are a product of these South African jazz communities, with horn sections reminiscent of the great trumpeter Hugh Masekela, and Nonhlanhla Kheswa’s strong and passionate vocals. Kheswa was born and raised in Johannesburg townships and attended the historic Morris Isaacson High School, one of the schools involved in the Soweto uprising. Before leaving school in 1998 Kheswa was recruited for a movie, and following her move to the U.S. became a successful Broadway actress. After many years of experience, Kheswa formed a jazz band with “The Martians,” all jazz students of Jackie McLean, profiled in the documentary Jackie McLean on Mars (1983).

On this album, Kheswa & Her Martians “steal” songs from the anti-apartheid era, such as Strike Vilakazi’s “Meadowlands.” Vilakazi wrote this song about the forced removal of African citizens from Johannesburg to the township called Meadowlands. While the song has never faded away, Kheswa & Her Martians bring new life to it with beautiful, bold jazz vocals, a bright horn section, and an improvisatory piano solo. Kheswa also explains on the track how Meadowlands was famous for its “stolen jazz” during the Apartheid era. On tracks such as “Tshona” and “Qual Kwedini,” the band reinterprets jazz pieces by South African artists. Miriam Makeba’s songbook is frequently drawn upon, including  “Ntyilo Ntyilo,” “Malaika,” and “Jikele Maweni,” while her ever-popular “Pata Pata” is mixed with two other songs onto a single track. Kheswa & Her Martians are among the first to reinterpret these “stolen” songs from South Africa’s collection of self-reflective music through jazz, successfully updating the music for a new generation.