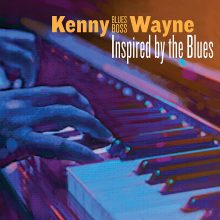 Veteran blues musician Kenny Wayne might have been raised as a preacher’s kid, but when he found himself “turning from the Lord’s work to the Devil’s music,” the “Blues Boss” was born. Well-known for his flamboyant zoot suits, boogie-woogie piano playing, and affinity for the classic jump blues of Amos Milburn and Louis Jordan, Wayne strives to keep all of these styles alive. As the septuagenarian states, “That’s classic stuff. And I’m at that classic age, so it all works out.”  On his 10th release, Inspired by the Blues, Wayne and his band are joined by several special guests, including legendary Chicago harmonica player Billy Branch, guitarist Duke Robillard, and B.B. King’s long-time bassist Russell Jackson.

Opening with the autobiographical shuffle, “I Knew I’d Be Playing the Blues,” Wayne tells a classic story of seduction; in this case, how he was led astray by secular music:  “I was brought up in church, in L.A. town/You could hear the blues all around/On Saturday night the music was loud/Here comes the police to break up the crowd/And somehow I knew, Lord I’d be singin’ and playin’ the blues.” Though the lyrics don’t delve much deeper, that’s alright because it leaves plenty of space for Branch to take a few solo turns on the blues harp.

Wayne really comes into his element on tracks such as “Start Rockin’,” “Jimmy and Johnny” and “Lake Country Boogie,” which showcase his distinct boogie piano style while also giving a nod to the foundations of rock and roll and jump blues. “That Raggedy Shack” is another jump blues throwback, featuring Dave Babcock on sax. Of course, a preacher’s kid can’t get by without including a message song. “That Girl Needs Help” was composed after Wayne heard a news report about troubled youth. The contemporary up-tempo blues track urges folks not to look the other way when someone is in trouble, and Branch keeps the mood upbeat with his swinging solos.

Wayne also pays tribute on this album to two of his favorite musical legends. “Mr. Blueberry Hill” pays homage to New Orleans’ pianist Fats Domino, who transformed boogie into rock and roll. The album closes with a live recording of “Georgia on My Mind,” and serves as Wayne’s tribute to another favorite musician, Ray Charles.

Kenny “Blues Boss” Wayne’s Inspired by the Blues is a unique album, offering original compositions in styles not often heard these days. But if you’re a fan of classic boogie woogie and jump blues, you’ll find much to love.