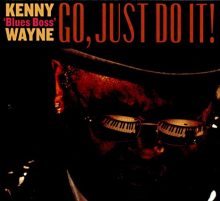 Usually thought of as a blues musician, Kenny Wayne is too versatile as a player to be bound within any one genre. Now 75 years old, Wayne has been paying his dues for a long time, and that level of experience is evident on Go, Just Do It!  Playing like a seasoned veteran—always playing the right notes, and always in the groove—it is obvious why Wayne has been inducted into the Boogie Woogie Piano Hall of Fame in Cincinnati. On this latest release he is joined by veteran personnel, such as former B. B. King bassist Russell Jackson and a rhythm section rounded out by Joey DiMarco on drums and Yuji Ihara on guitar, both of whom have played with the Canadian act Boogie Patrol. Harmonica ace Sherman “Tank” Doucette plays on “They Call Me the Breeze,” and Wayne is joined by Grammy winner Diane Schuur on a cover of Percy Mayfield’s “You’re in for a Big Surprise.” A horn section consisting of Jerry Cook on sax and Vince Mai on trumpet rounds out some of the other notable personnel on the record.

While most of the songs on this album are Wayne’s original compositions, it is the musicianship that really shines as the band complements his soulful voice and tasteful piano. Russell Jackson demonstrates that the driving force behind any song is the bass and, collectively, his playing is one of the highlights of the album. On “That’s the Way She Is,” the most grooving track overall, Jackson’s bass pushes the song along in concert with Wayne’s electric piano. Ihara’s guitar solo on this track is tasteful as well, and he also plays a standout solo on “You Did a Number on Me.” Frankly it is a shame Ihara is not featured on more of the album, but perhaps it is the occasional inclusion of lead guitar that is exactly what makes these solos stand out.

On “Just Do It,” featuring Dawn Tyler Watson, Wayne’s electric piano is somehow both laid back and upbeat at the same time. In fact, most of the album consists of upbeat tunes that will get feet moving, yet Wayne always maintains a casual, relaxed feel in his playing. “Motor Mouth Woman” is a straight-ahead Chicago-style blues that is hard not to tap along to, while “Sittin’ in My Rockin’ Chair” highlights Kenny Wayne’s easygoing acoustic piano playing. “You’re in for a Big Surprise” is a slow minor blues that has a different feel than the rest of the album, with a sax solo and vocals by both Diane Schuur and Wayne. And “Sorry Ain’t Good Enough” is essentially a contemporary R&B track that fits the format of this album well.

Go, Just Do It! is an album worth listening to for any blues fan, but it covers far more than one genre. Equal parts R&B and funk, there are other tracks, like “Let the Rock, Roll,” that sound like a Jerry Lee Lewis boogie woogie. The addition of a J. J. Cale cover song, “They Call Me the Breeze,” further adds to the stylistic ambiguity. Moreover, “I Don’t Want to Be the President” features rap, certainly unexpected in this context—yet it works!

Solo records by pianists are sometimes overshadowed in a field dominated by guitar players, but Kenny Wayne’s latest outing deserves to stand out. One thing is certain—there is something for almost anyone on this record. Don’t overlook this one!