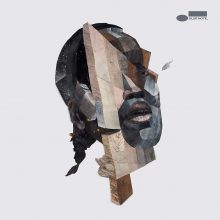 According to Scott, “Walls are easier to build than bridges. We are often quicker to stack bricks built of fear than we are to weave a cable of empathy and reach across a divide. Where I see walls, I see an admission of our fundamental fragility [and] vulnerability.” Scott also asks the question: “How [can] I personally, and we collectively, use those vulnerabilities not as points of separation, but as points of convergence?” Scott explores this narrative through 12 stages which include “Perspective, Breakthrough, Doubt, Acceptance, Denial, Innocence…transformation and optimism.” These correspond to the album’s 12 tracks: “New Eyes,” “Mocean,” “Windows,” “Voices,” “BeLoved,” “Don Blue,” “Becoming,” “Horizons,” “The Catalyst,” “Plēh,” “Nemesis,” and “Archangel.” Scott retraces the narrative from the end to the beginning, conceptually addressing systemic racism and prejudice, while examining how perceived fear can be transformed into a bridge that promotes and encourages societal unity.

A Wall Becomes a Bridge is a thought provoking work that confronts the current socio-political climate in our society, and offers a hopeful prospect for the future.