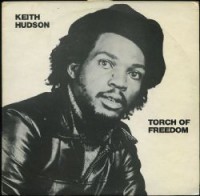 The first release from the new reggae/dub/dancehall reissue label Hot Milk aims to be a big one with Keith Hudson’s Torch of Freedom. Initially released alongside other Hudson classics such as Pick a Dub (1974) and Flesh of My Skin, Blood of My Blood (1974), Torch of Freedom (1975) fell into relative obscurity as the forgotten gem of the Jamaican producer/singer/songwriter’s solo career. Maintaining that dark, sinister sound that only Keith Hudson could conjure up, the album finally gets the reissue treatment that it so greatly deserves.

Listening to Torch of Freedom, it’s hard to comprehend just why it took so long for it to be reissued, as the album contains a wealth of signature Hudson creations. With the famous Soul Syndicate, along with Robie Shakespeare and Candy McKenzie, among others, providing their limitless talents, the haunting instrumentation meshes with Hudson’s often hard-to-decipher, yet elegant lyrics to create an emotional, hard-hitting album. For a more thorough understanding of his music, take a listen to the track “Turn the Heater On” (track 8) and compare it to the dub version, “So Cold Without You” (track 9).

Hot Milk Records has come out swinging with this amazing reissue of an album that, until now, had been an almost unattainable commodity. Keith Hudson is really on top of his game, and fans of “The Dark Prince” can finally rejoice. I eagerly await what this new label has in store for 2013.