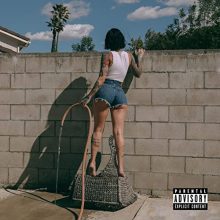 Title: It Was Good Until It Wasn’t Artist: Kehlani  Label: Atlantic  Formats: Digital   Release date: May 8, 2020

Two-time GRAMMY® Award-nominated R&B singer Kehlani has released her long-awaited sophomore album, It Was Good Until It Wasn’t. The former America’s Got Talent star’s debut album, SweetSexySavage, was inspired by TLC’s CrazySexyCool, providing fun, rhythmic, and exuberant sounds Kehlani’s best known for putting out. Kehlani’s new album is much more pared down, expressing slow and sensual narratives, as much indebted to SZA as it is SWV. For this project, Kehlani collaborated with a multitude of guest artists, from the likes of Tory Lanez, Jhené Aiko, Lucky Daye, James Blake, and Masego, all of which do an exceptional job helping to convey her R&B eclecticism—as well as contributions from producers Boi-1da, Andrew “Pop” Wansel, G. Ry, and many more.

It Was Good Until It Wasn’t is described by Kehlani as her most mature body of work, featuring songs based on her own real experiences including recently released “Everybody Business.” She explains, “It’s super honest. It’s darker. Whereas a lot of my earlier projects were very bright, It Was Good Until It Wasn’t is sexier. When you’re a musician, you come from real experience. No matter what the experience is, it’s going to transfer to the music. Having a baby helped me be a lot more womanly and ‘adult’. The music is more meaningful. My daughter is the biggest indirect influence on everything I do. If it sounds grown-up, it’s because of her.”

Due to the global pandemic, several components of the album, from music videos to promotion, had to be altered or re-envisioned to fit the circumstances. The album artwork reflects Kehlani’s signature DIY “quarantine-style,” adding to her impressive portfolio including self-shot and edited music videos for several singles: “Toxic,” a track addressing the fraught aspects of a toxic relationship; “Everybody Business,” targeting the constant rumors and speculation on her love life; and “F&MU,” with the title alluding to the premise of the track—the concept of make-up intimacy.

It Was Good Until It Wasn’t is a record that lays bare the realities and pressures of romance and stardom, wrapping it all up nicely in a cohesive album, in spite of the large amount of hands touching the project. In the end, you’ll know exactly what’s on Kehlani’s mind, heart, and soul.