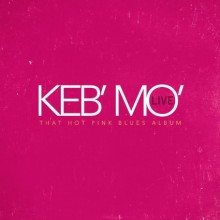 For years now we have been using the term “smooth jazz.”  So, are we ready to consider “smooth blues” a musical genre?

If so, Keb’ Mo’s latest release, That Hot Pink Blues Album, would be a textbook for the style.  The two-disc live album features performances from the guitarist/singer/songwriter’s 2015 tour and a retrospective of songs from the three-time Grammy Award winner’s twenty-one years in the music industry.  But, more importantly, That Hot Pink Blues Album shows how Keb’ Mo’s blues foundation has merged with R&B, jazz, Americana, and pop to create an accessible, polished, and perhaps even androgynous blues style.  I mean, seriously, when was the last time we associated the color hot pink—barring Pink Anderson’s name—with the blues?

The foundation for Keb’ Mo’s style is optimism.  His blues are not about heartache or poverty, but ring with positive messages of good-times and lookin’ on the bright side.  On songs like “Life is Beautiful,” the musician sounds like a crooner—the song’s string arrangement, bouncy rhythm, and care-free lyrics would sound appropriate if performed by Rod Stewart (The Great American Songbook version of the rock-turned-adult contemporary vocalist, not the Jeff Beck Group one) or Barry Manilow. Keb’ Mo’ is at his best when his positivity incorporates a little grit, as heard on “Dangerous Mood” or “The Worst is Yet to Come.”

Technically, That Hot Pink Blues Album highlights Keb’ Mo’s talent as a songwriter and guitarist.  He authored or co-authored all sixteen of the album’s tracks and the live album setting gives his guitar playing room to shine.  The album also benefits from the instrumental prowess of Michael Hicks, whose keyboard and organ playing lend a variety of rich textures to Keb’ Mo’s straight-forward compositions.

For local Bloomington readers, That Hot Pink Blues Album, is a great teaser for Keb’ Mo’s upcoming performance at the Buskirk-Chumley Theater on April 21 at 8:00pm.  There, attendees can hear the songs that comprise Keb’ Mo’s latest release and hear for themselves if the era of “smooth blues” is among us.