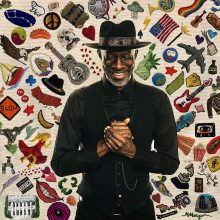 Blues musician Keb’ Mo’ has often incorporated elements of other genres in his music and his new release, Oklahoma, is a stellar example. Featuring artists ranging from Rosanne Cash and Jaci Velasquez to Robert Randolph and Taj Mahal (his collaborator on the 2017 release TajMo), Keb’ renders ten tracks of blues-infused Americana. The artist, who is celebrating twenty-five years in the music business, recently revealed the connections between his current frame of mind and the societal issues that fueled his songwriting: “When you are in a certain part of your life, the concept of an album is woven into the process. All of these songs stemmed from important issues and topics worldwide that really resonated with me during the time we were recording the project.” These topics include depression and waning love—the backbone of the blues—as well as contemporary concerns such as immigration and environmental degradation.

Opening with “I Remember You,” Keb’ picks up his National steel guitar as he tells the tale of an unforgettable woman in a red dress last seen “walkin’ out the door.” Drummer Marcus Finnie keeps the groove steady on this contemporary blues tune with Jim Hoke adding to the ambiance on Wurlitzer.

The title track, “Oklahoma,” was inspired by Keb’s performance at a 2013 benefit for victims of a tornado that caused widespread devastation in the state. Several years after this journey through tornado alley, Keb’ met up with Oklahoma native Dara Tucker, who co-wrote this uplifting song about resilience. The Latin-flavored track features a lively interplay between steel guitarist Robert Randolph and violinist Andy Leftwich and is one of the highlights of the album.

Another highlight is the female empowerment anthem, “Put a Woman in Charge,” featuring Rosanne Cash. Released last year, the song quickly became a campaign anthem: “Here we are standing on the brink of disaster/enough is enough is enough, I know the answer—put a woman in charge!” “Don’t Throw It Away,” featuring Taj Mahal, is an ode to recycling with the refrain “You gotta use it again, baby (don’t ya throw it away),” while “This Is My Home,” featuring Jaci Velasquez, traces the path of immigrants from across the globe who have settled in the U.S. and “know, this is where they belong.”

Oklahoma concludes on a positive note with the duet, “Beautiful Music,” featuring Keb’s wife, Robbie Brooks Moore. Backed by a lush string section, the couple clearly embrace this song about life, purpose, and above all—love, perfectly summarizing the heart and soul of the album.