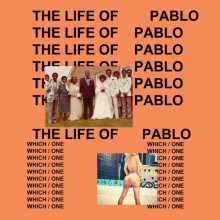 Title: The Life of Pablo

Kanye West’s The Life of Pablo is a disconnected, spontaneous, yet ultimately passionate body of work that seems to parallel his current public persona. The album, given only to fans via the Tidal streaming service, was released earlier this year on February 14 and is Kanye’s seventh studio album. The deluxe version of the album contains 18 tracks, and includes a variety of topics such as his turbulent relationship with Taylor Swift, his desire to become a better friend, and a plea to his wife for them to stop attending parties in Los Angeles. There are definitely a few hits on the album, but it does lack a cohesive, story-telling or cinematic experience, a talent he showed off on My Beautiful Dark Twisted Fantasy.

Kanye’s spastic personality has ensured that his music is always placed under a microscope, being dissected, scrutinized, and criticized more than most of today’s best artists. The album as a whole relies heavily on gritty, analog drum kits complete with Dilla-like swing, sounding similar to his College Dropout days but with added maturity. It’s also notably less influenced by electronic music than Yeezus was; however, he still seamlessly blends his trademarked (not literally) soulful samples with cutting edge digital instrumentation. A great example of this is on “Father, Stretch My Hands Part I,” where the intro gospel sample from Pastor T.L. Barrett transitions into a hard-hitting trap style drop with 1/64 hi-hats and snappy 808 snare rolls. The gospel theme can also be heard at other points throughout the album, linking together tracks like “Ultralight Beam” and the monologue “Low Lights” through expressive, soulful group-singing and chords.

Another track that deserves special attention is “Real Friends.” Quite possibly the most introspective song from Kanye on the entire album, it begins with a somber, airy piano pad. The grainy, distant melody provides a gloomy tone to be used throughout the whole song. Once the beat drops, rumbling kicks and a subtly filtered yet heavily reverbed snare settle in and drive the rhythm. Ty Dolla $ign provides auto-tuned background vocals, and even at times creates a head-nodding call and response flow. The hook is a simple repetition of the line: “Real friends, how many of us, there’s not many of us, real friends,” with the verses highlighting his displeasure of only being contacted when friends need a favor, as well as his unstable relationships with extended family. “Real Friends,” along with “Ultralight Beam” (featuring Chance the Rapper, The-Dream, Kelly Price, and Kirk Franklin), “Famous,” “Waves,” and “No More Parties in LA” (featuring Kendrick Lamar) are the home runs of the album due to the depth of their lyrics and production quality. These tracks could easily make their way to the mainstream media in the near future.

Although sonically ahead of the game, as most of Kanye’s albums are, The Life of Pablo makes a convincing argument that it was recorded with no real plan or direction in mind. There are roughly 6-8 extremely meaningful, well-crafted songs on the album, while the rest of the tracks and intermissions sound like older material added for quantity, rather than quality.