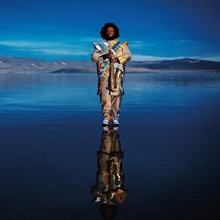 While technically his third release as a leader, Kamasi Washington’s newest record, Heaven and Earth, is the second in an extra-long play format. The double album, like 2015’s The Epic, stretches well over 2 ½ hours across two CDs (the LP version is 4 discs with an additional hidden inside the centerfold, giving listeners a compelling version to purchase this one on vinyl). While Washington certainly has much to say, this album doesn’t feel long-winded. His excellent band keeps things interesting for the entire 2 hours and 24 minutes of Heaven and Earth’s sonic exploration.

Washington is a marvelous player, but his talents of composition and orchestration are what lie at the heart of this album—the music is orchestral, improvisational, and undeniably hip all at once.  It’s no wonder that he and the crew of musicians he regularly works with, including his crack rhythm section of the Bruner brothers (bassist Stephen AKA “Thundercat” and drummer Ronald Jr.), are first-call musicians for sessions and production work.

It is possible to say that Washington has grown as a composer while also acknowledging that his previous full-length was released by a fully-formed artist. While The Epic spanned much musical territory, Heaven and Earth demonstrates skillful use of musical contrast within tracks as well as on a tune-to-tune basis. Washington’s music works on many levels—for instance, the album’s foreshadowing opener, “Fists of Fury,” is about righteous indignation. The track’s vintage orchestral sound would easily be at home in the title sequence of a neo-western or kung fu movie, but also features a blazing doubletime piano solo incorporating very hip jazz harmonic and rhythmic vocabulary.

“The Invincible Youth” begins with a roiling Ornette Coleman-esque introduction and then evolves into a synth-jazz odyssey, while “Testify” is a poetic slow jam that would not be out of place on a ‘70s Stevie Wonder album. “Street Fighter Mas” is a funky tune on which Washington really stretches out on his sax; “Journey,” on the other hand, is a sparsely arranged jazz hymn.  “The Space Traveler’s Lullaby” perhaps best captures Washington’s maximalism—it’s a fully fleshed-out orchestral work that stretches to 10 minutes in a swirling collection of textures, colors, and harmonies that might make orchestral and cinematic composers jealous.

Even though Heaven and Earth pushes 3 hours, it’s not dull for a single second. The album’s gargantuan musical scope allows it to earn its title, as Washington takes his listeners through its many twists and turns with an unparalleled sense of taste. Certainly worth the celestial journey,  this epic album that features a great deal of greatly complex music.  Like a good book, Heaven and Earth can’t be digested in one sitting, but it is good enough to explore again and again.