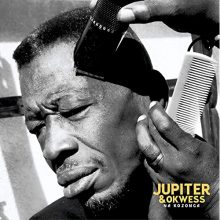 Hailing from the Democratic Republic of Congo, Jupiter & Okwess makes music that pulls together international musical influences in a stand against global injustice. Their newest release, Na Kozonga, is an explosive and energetic compilation of music featuring the Preservation Hall Jazz Band horn section, pioneer of Brazilian rap Marcelo D2, and the vocals of American Maiya Sykes and Chilean Ana Tijoux.

Na Kozonga was recorded at the studios of Mario Caldato in Los Angeles and was produced in a way that respects the sophisticated rhythms and undeniable energy of the group. The album offers reflections on the effects of colonization as well as positive messages of hope and strength. Moments of aggressive instrumentation and explosive rhythms are interspersed with gentler and more intimate moments like in Jupiter’s soft vocals as he sings about a departed friend on “Marco.” The music is reminiscent of the journeys and backgrounds of the many musicians who worked on the project, from choruses of Congolese rumba on “Sava Sarava” to Chilean singer Ana Tijoux’s harsh criticisms of colonization on “You Sold Me A Dream.”

Jupiter & Okwess’s latest release bears the marks of a global cohort of musicians as they navigate life in a world fraught with cruelty and injustice. Framed by the Congolese influence of Jupiter & Okwess, the album explores everything from despair and rage to love and celebration.