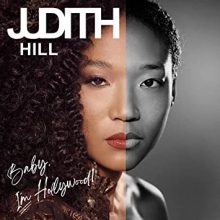 Opening with “When My World Is Blue,” Hill offers an intimate look at her emotional journey and inner personal struggles, which will likely resonate with listeners who have also struggled to cope during the Covid-19 pandemic. The soulful ballad features an elegant, acoustic piano accompaniment that is reinforced by strings as the song builds. In this moment, Hill’s vocals and production draw an unmistakable comparison to a Motown-era Stevie Wonder.

Though most think of Hill as a soul and R&B artist, the title track firmly establishes her as a woman who rocks. Displaying Hill’s considerable electric guitar chops and powerful vocals reminiscent of Tina Turner, “Baby I’m Hollywood” is a tour de force. Hill explains that the song  “captures her free spirit, yet lyrically, it underlines the pain she has endured.” She goes on to say, “It is very much a reflection of my life and how it has been growing up in the entertainment business. The show must always go on and yet you learn how to put your pain in the songs…that is what makes the stage so visceral and alive. Beyond the lights and glamour, there is depth. I wanted to show that side of Hollywood and give the word a different feeling.”

The album’s lead single, “Americana,” finds Hill expressing both sides of her identity as a bi-racial Japanese and African American woman. As she explains in the mini-documentary about the making of the video, the song speaks to the stereotypes and struggles that people of color face in America, including Anti-Asian racist and xenophobic violence during the pandemic. In the video she embodies the struggles of minorities to belong, and the fight to escape social restrictions and injustices. There is little doubt that these stereotypes mirror Hill’s general treatment and marginalization in the music industry.

The electro-funk of “God Bless the Mechanic” with his “special tools” and ‘You Got the Right Thang” are direct descendants of Prince’s Paisley Park productions. Switching things up yet again, Hill roughens her vocals for the sultry blues of “Burn It All,” proving she is a chameleon who can change timbres to suit any genre. There are many other album highlights including the power ballad “Give Your Love to Someone Else,” the cinematic “Silence,” the Broadway styled “Miss Cecelia Jones,” the rocking soul of the female empowerment song “Newborn Woman,” and the high octane “Step Out” that pulls out all of the stops with a tight horn section, jazzy vocalizations and Latin percussion. Concluding with a slow jam, “Candlelight in the Dark,” Hill’s summons the depths of her gospel roots to deliver a powerful finish that will immediately remind listeners of Arethra Franklin at the peak of the soul era.

Judith Hill delivers a remarkable performance on the surprisingly eclectic Baby I’m Hollywood, which will appeal to anyone who was raised on classic funk, soul, and R&B. If you long for contemporary soul singers who can raise the roof and really sing, then Judith Hill will not disappoint.