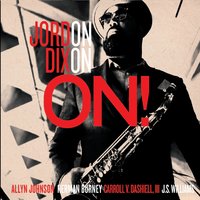 A native of Baton Rouge, Louisiana, tenor-saxophonist Jordon Dixon relocated to Washington, D.C. a few years ago after concluding an 11-year career as a musician with the U.S. Marine Corps. Since that fortuitous decision, he has become a fixture on the local scene. On his sophomore release, ON!, Dixon also has an opportunity to flex his muscles as a composer, presenting nine original tracks in a variety of styles. He is joined by other D.C. stalwarts including pianist Allyn Johnson (who engineered and co-produced the album), bassist Herman Burney, and drummer Carroll “C.V.” Dashiell, III.

Opening with “Notes from the Nook,” Dixon sets the tone for a mellow summer’s eve, then ramps it up with a harder funk edge while Johnson lays down a smooth groove on piano and organ.  The ballad “What You’ve Done for Me,” which clocks in at nearly nine minutes, is a showcase for Dixon’s sumptuous tone and singing melodic line backed only by Johnson’s tasteful piano accompaniment. As one might have guessed, “ON!” is one of the harder swinging tunes on the disc, and the ensemble stays right in the pocket while trading off solos. Another highlight is “Flame and Friction,” a slow burner featuring trumpeter J.S. Williams that takes us on a bluesy turn down Bourbon Street. Whether a conciliatory gesture or an affirmation of love, the slow tenor ballad “She Meant It When She Said It” is another sensuous showcase for Dixon, who offers some of his most expressive and soulful playing over Johnson’s fluid piano fills.

On the closing track, “Fake Flowers,” Dixon takes us back to Louisiana on this fun romp through the streets of New Orleans filled with Dashiell’s second line rhythms, Johnson’s boogie-woogie piano licks and Williams adding the essential essence of a NOLA horn section. Yes, Dixon and his backing musicians are most definitely right on the money, right on the groove, and just plain right ON!