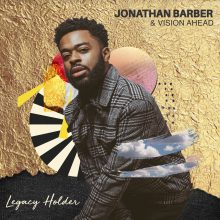 Barber’s new album solidifies the musical, cultural and spiritual direction that guides his ensemble, which features saxophonist Godwin Louis, guitarist Andrew Renfroe, bassist Matt Dwonszyk, and Taber Gable on keyboards. Through this solid foundation, the musicians are able to create and share a narrative that not only carries on a legacy, but also breaks down barriers that create limitations and stigmas. As Barber explains, “We are all legacy holders. We must stand strong for the cause and assist in making change. The continuation of unity or division relies on us.” These beliefs are reflected in the titles of the eight original tracks composed by Barber, which also synthesize his various musical influences.

Opening with “The Call,” vocalist Mar Vilaseca leads us through this inspiring jazz fusion track with a touch of neo-soul. The mellow mood continues with “Find My Way,” as the melody line shifts to the alto sax in cycling riffs as Barber drives the rhythm forward. On “Legacy Holder” and “Kaikus,” the interplay of the ensemble becomes much more intricate, with members alternating solos and injecting a steady stream of harmonic and melodic variation.

Moving into more of an uptempo swing on “Major,” the group takes a sudden left turn towards the end, pairing Barber’s wicked drum solo with an erratic piano ostinato. The rhythmically complex “Seconds and Seasons” is another incredible showcase of Barber’s talents. In a nod to his hometown on “Son of Hartford,” Barber hints at other musical influences, including a little rock and fuzzed up guitar, a bit of urban jazz in the sax melodies, and some classical style piano riffs. Concluding with “29,” presumably a comment on Barber’s age at the time of this recording, the quintet cuts loose as each member takes a solo before joining together for a final bow.

Legacy Holder is a masterful sophomore release from Jonathan Barber that can be appreciated on many levels, from the serenity of the minimalism to the incredibly intricate ensemble performance and, of course, the intensity and creativity of the drummer.