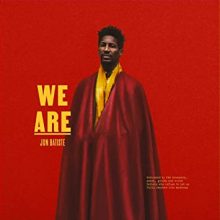 Fresh off of winning a Golden Globe and Critic’s Choice Awards for his score to the animated film Soul, pianist/composer Jon Batiste has released a new album with similar sensibilities. We Are is a masterful synthesis of musical styles, most notably those reflecting Batiste’s upbringing in New Orleans amidst a family dynasty of notable jazz, blues, and R&B musicians. Add to this mix Batiste’s classical training at Juilliard and his roots in the church, and you get a musician who is fluent in every major musical genre, all of which are seamlessly integrated in this album.

As Batiste explains in his visual mission statement, “I find that a lot of times in society people want to limit the expression of Black artists to a specific segment of sound and timbres, and that to me is a form of marginalization that I can’t stand…Years and years of life [are represented] in every track that I cut a slice of and I give to you as a service, and that’s authentic in this time of manipulation and misinformation.” He developed the vision for the album in 2019 after six days of recording demos in his dressing room at the Ed Sullivan Theater, where he serves as music director and bandleader for The Late Show with Stephen Colbert. In addition to defying genre boundaries, he also wanted to stress the importance of lineage in his celebration of Black culture, which he certainly accomplishes in the opening title track.

“We Are” is a multi-generational tour de force featuring the New Orleans Gospel Soul Children choir, the St. Augustine High School marching band (Batiste’s alma mater), his preaching grandfather (an elder with the AME Church), his father Michael Batiste (on bass), assorted young nephews, as well as his co-writer for many of the songs, Autumn Rowe. As with most of the tracks on the album, Batiste is the lead vocalist on this affirmative song about the power of joy and community. As he sings, “We’re never alone” the chorus responds, “We are the golden ones, we are the chosen ones.”

One of the album’s biggest surprises is Batiste’s incredible vocal talents. From the gritty Southern soul of “Tell the Truth” to the falsetto chorus of the ballad “Cry” to the staccato rapping of “Whatchutalkinbout,” he proves there’s nothing he can’t do on the keyboard, or with his voice, or any of the other instruments he plays on various tracks including guitar, bass, alto sax, and percussion. Other notable New Orleans musicians are brought into the mix, including PJ Morton & Trombone Shorty who collaborate on “Boy Hood,” vocalist Tarriona ‘Tank’ Ball and the Hot 8 Brass Band on “Adulthood,” plus the great Mavis Staples providing narration on the intro to “Freedom,” a bouncy booty shaking dance groove propelled by Dutch producer/instrumentalist Kizzo and guitarist Cory Wong. Last but not least, the Mardi Gras Indian Show makes an appearance on the brief closing track, “Until.”

Other album highlights include “I Need You” that embraces the joyous spirit of Black dance, the R&B song “Show Me the Way” featuring Zadie Smith and Marcus Miller, and “Movement 11,” an instrumental for piano and strings with classical influences.

Though the currents of jazz flow through this project, Jon Batiste proves that he is so much more than a jazz pianist. In the same manner that he led Black Lives Matter protests in New York, his new album serves as a protest against the narrowly defined genre box that labels and fans often impose on artists. Defiantly breaking out of the box, Batiste’s We Are is astonishing in its breadth and vision, and will surely stand out as one of the best albums of the year.