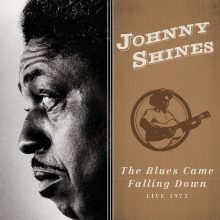 Blues singer and slide guitarist Johnny Shines had quite the career; his accomplishments include touring with Robert Johnson, recording for Columbia, Vanguard, and Chess Records, as well as playing with blues legends like Little Walter and Willie Dixon. Following his success in the 1930s and ‘40s, however, Shines experienced a series of commercial failures before stepping away from music. A few years later, at a show in Chicago, he was “rediscovered” and began actively touring and recording music again. It was at the peak of Shines rediscovery that The Blues Came Falling Down – Live 1973 was captured.

Following his 1992 death, Johnny Shines was inducted into the Blues Hall of Fame that same year. A testament to his skill as a blues musician and a record of his “rediscovery” era, The Blues Came Falling Down is an important addition to the Johnny Shines discography.